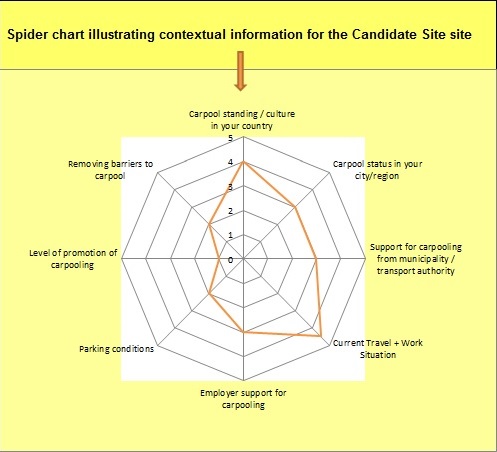 This tool enables a quick assessment of a candidate site’s suitability for carpooling and indicates (in a very general manner) the likely impacts of introducing the CHUMS measures as well as identifying supporting measures which are most likely to maximise the impact of CHUMS.

The tool takes the form of a Microsoft Excel file which asks users to answer 37 simple checkbox questions related to eight key factors which influence carpooling (it should take no more than 10 minutes to complete).

The answers a user enters for each question provide a measure of the current status for each of the factors at the site in question (the questions are weighted according to their relative importance). The eight factors have been identified from extensive review of literature supported by surveys with CHUMS partner sites/ carpool service providers as having the greatest bearing on the suitability of a particular location for carpooling.

The tool produces a number of useful outputs informed by the site specific information provided by the user:

• A spider chart illustrating at a glance the contextual situation in their country/region and at their candidate site. The eight spokes of the web represent the factors which have the greatest bearing on the suitability of a particular location for carpooling. This allows the user to quickly identify the factors which are currently limiting successful carpooling initiatives.

• An impact chart which indicates the potential impact that introducing the CHUMS measures is likely to have at their site based on the contextual information provided. The position of the five CHUMS demonstration sites (prior to introducing CHUMS) has been mapped onto this, allowing users of the tool to gauge how their site compares.