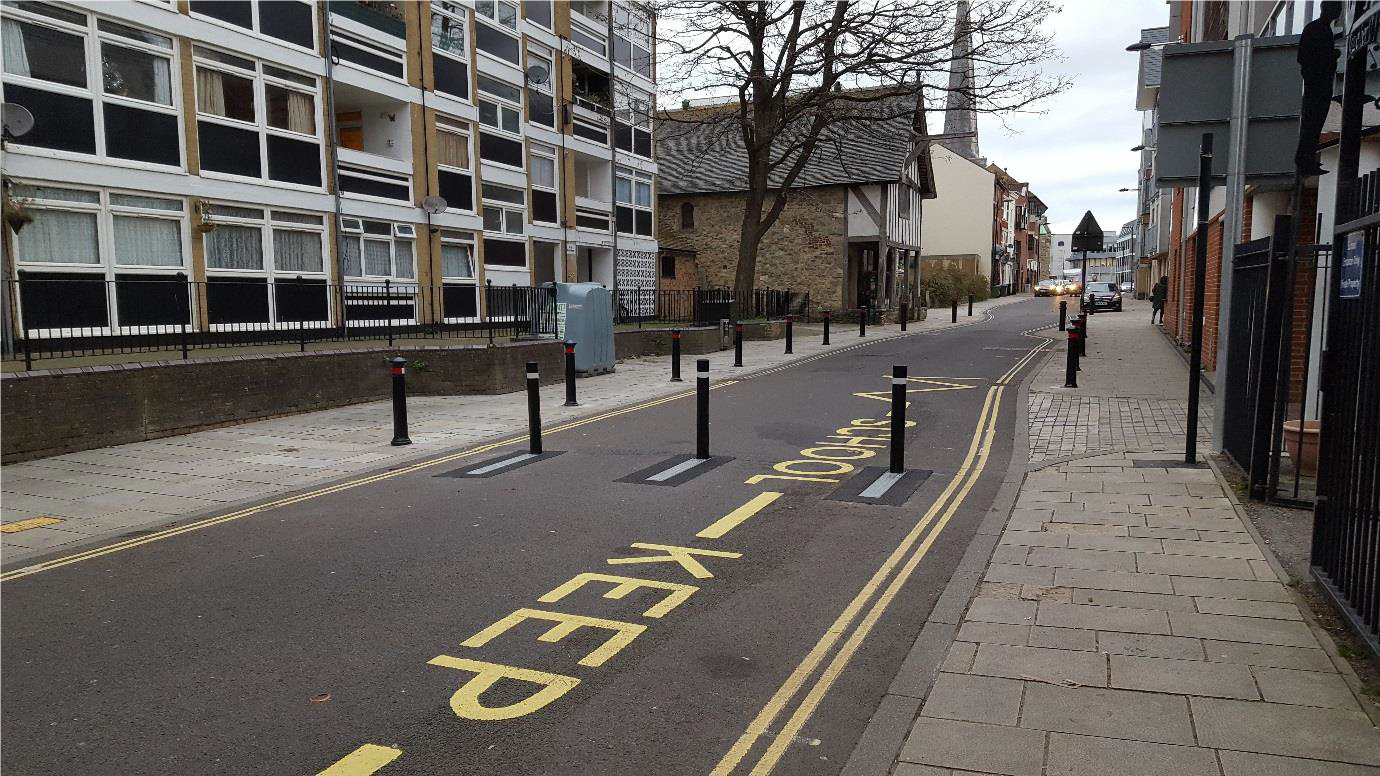 St. Johns Temporary School Street Opening in Southampton was implemented with the aim of making a school street more child-friendly.

The street was first opened to pedestrians temporarily using portable bollards to restrict traffic for 45-minutes during school drop off and pick up times. However, coffin bollards that are lowered and raised every school day have since been permanently installed following successful implementation and a positive evaluation.

A temporary (18-month) street opening was created using portable bollards which were put in place only during school drop-off and pick-up times. The bollards were in place to restrict traffic for 45-minutes around the busiest school traffic period. A series of formal and informal activities and trials helped to prepare and support residents and students to feed in their thoughts, use the space and reconsider the way they move around this community area. The measure involved the implementation of the temporary street opening as well as consultation with residents and parents on the potential to make the opening a long-term measure over the course of 18-months. The measure was subsequently reviewed and permanently installed - helping students and parents by enabling and encouraging active travel.

The measures were first implemented temporarily - however, coffin bollards are now a permanent fixture on the school street and are lowered and raised every school day by the caretaker. The transport choice for home-to-school trips by children has changed to the benefit of healthier modes of transportation. The share of active modes of transportation has also heavily increased. Children felt less intimidated by road traffic. The street opening also improved perceptions of traffic noise and reduced air pollution. The project has had a strong impact on the child-friendliness of the surrounding neighbourhood.

The project encountered some obstacles, such as reluctance from some residents, as well as political, legal, and administrative barriers. For example, in Southampton, streets can only be opened with the help of volunteers being permanently on-site - or with bollards. Opening the street with people is very resource-intensive and so bollards were used. It took some trial and error to agree on the positioning of the bollards.

Nonetheless, political support, good cooperation between the schools, parents, and children - as well as focusing on communicating the measures where drivers would be able to see the information. One particularly important aspect, was communication and cooperation with children, piquing the interest of children and making it fun for them during activities -also ensuring the support of parents. St John's timed school opening has been very successfully implemented.

The measure taken in Southampton could be easy to initiate, although the budget might be a barrier for financially weak municipalities.

The impacts of the intervention were assessed with a selection of indicators. Questionnaires in relation to the road opening were distributed, in order to capture a "before and after" response to the implementation of the temporary road opening. 38 responses were captured over two dates. In the case of Southampton, the cooperation worked very well and shows successful results.