Skip to main content
Home Resources Case Studies The redesign of the Jahnplatz square in Bielefeld: using a pilot phase to demonstrate the viability of changes to an urban traffic node

The redesign of the Jahnplatz square in Bielefeld: using a pilot phase to demonstrate the viability of changes to an urban traffic node 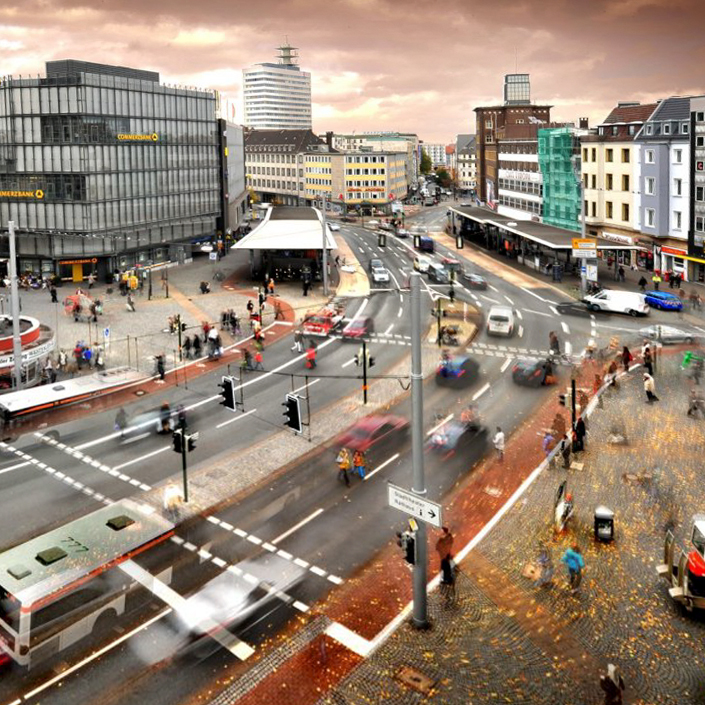 As with many cities in Europe, Bielefeld in Germany has high daily volumes of traffic. Its current mobility strategy aims to reduce the share of motorised individual trips (such as by cars, motorcycles, mopeds) from 51% to 25% by 2030. One of the traffic hotspots in Bielefeld is the Jahnplatz square located at the northern edge of the historical city centre. It connects the centre to the main commercial areas that continue north in the direction of the main railway station. The Jahnplatz experienced concentrations of nitrogen dioxide (NO2) that exceeded the legally allowed maximum and had high volumes of motorised vehicles crossing the square between the city centre and its commercial areas.

To address this challenge, Bielefeld decided to reduce individual motorised traffic in the Jahnplatz to reduce air pollution and create a more liveable public square right at the heart of the city. To reduce the risk of failure, and to address some controversial opinions on necessary activities, Bielefeld implemented a lengthy pilot phase to test a new traffic scheme for the Jahnplatz. This involved reducing the number of lanes for individual motorised vehicles, and increasing the space dedicated to public transport and cyclists instead. The pilot phase ran for almost 2 years and was achieved at low cost by mainly putting in bollards, traffic signs and pavement markings. The pilot phase saw a decrease in NO2 levels to just below the legally binding maximum, as well as 25% fewer motorised vehicles crossing the Jahnplatz.

The City Council and administration made use of participatory approaches to engage stakeholders and residents, undertook feasibility studies on the intended traffic scheme design and developed a plan for the long-term modification of the Jahnplatz as a central element in the city centre. Based on the pilot phase, public participation and a controversial discussion at the city-wide level, Bielefeld City Council developed detailed plans for the long-term changes, has tendered for the works and started the first construction phase in July 2020.

The city of Bielefeld is located in the north-west of Germany and has a population of 340,000. It is in the centre of its region with a catchment area of more than 2 million people. In Bielefeld, there are about 1.1 million trips a day with 82,000 commuters coming to the city. The latest modal split estimate (from 2017) shows that about half of all trips are undertaken by motorised individual modes. Pedestrians, cyclists and public transport each account for similar shares of the other half of the trips. Bielefeld aims to drastically change the modal split to have an equal 25% share for car trips, pedestrians, cycling and public transport by 2030, as set out in its urban mobility strategy.

Back in 2017, Bielefeld’s major access roads had high traffic volumes heading into its central areas daily. The Alfred-Bozi-Straße/Herforderstraße road, facing about 22,000 individual motorised vehicles per day, splits the city centre from the pedestrianised commercial street Bahnhofstraße. Both these roads meet at the Jahnplatz, with pedestrian flows of more than 1,000 people/hour in the evening peak crossing the busy roads. The Jahnplatz is also the central urban public transport hub with an underground metro stop and more than 900 buses passing through the square each day. The high traffic volumes meant that the Jahnplatz was a very busy place, with high numbers of vehicles and people experiencing high levels of air pollution. NO2 concentrations of 49 micrograms per cubic metre (µg/m3) exceeded the legally binding threshold of 40 µg/m3 Consequently, Bielefeld needed to act to comply with the legally binding threshold.

Motivated by its urban mobility objectives, the need to reduce air pollution and, mainly, the desire to provide attractive urban spaces, Bielefeld City Council decided to redesign the Jahnplatz’s traffic scheme in May 2017.

Bielefeld City Council developed plans for changing Jahnplatz and, in October 2017, decided to make use of a pilot phase to test the proposed changes. This involved reducing the number of lanes for motorised vehicles from two to one in each direction, and to dedicate the second lane to buses and cyclists instead. The connection for motorised traffic from the Jahnplatz to the Niederwall Road, which encloses the historical centre at the southern edge of the square, was to be removed. At the same time, bicycle connections across the Jahnplatz in all directions were to be improved. The speed limit was to be reduced from 50 km/h to 30 km/h. The city conducted a study to check the applicability of its ideas for the pilot phase, including a simulation based on current traffic volumes testing the feasibility of a 20% increase of public transport and 400% of cycling volumes. 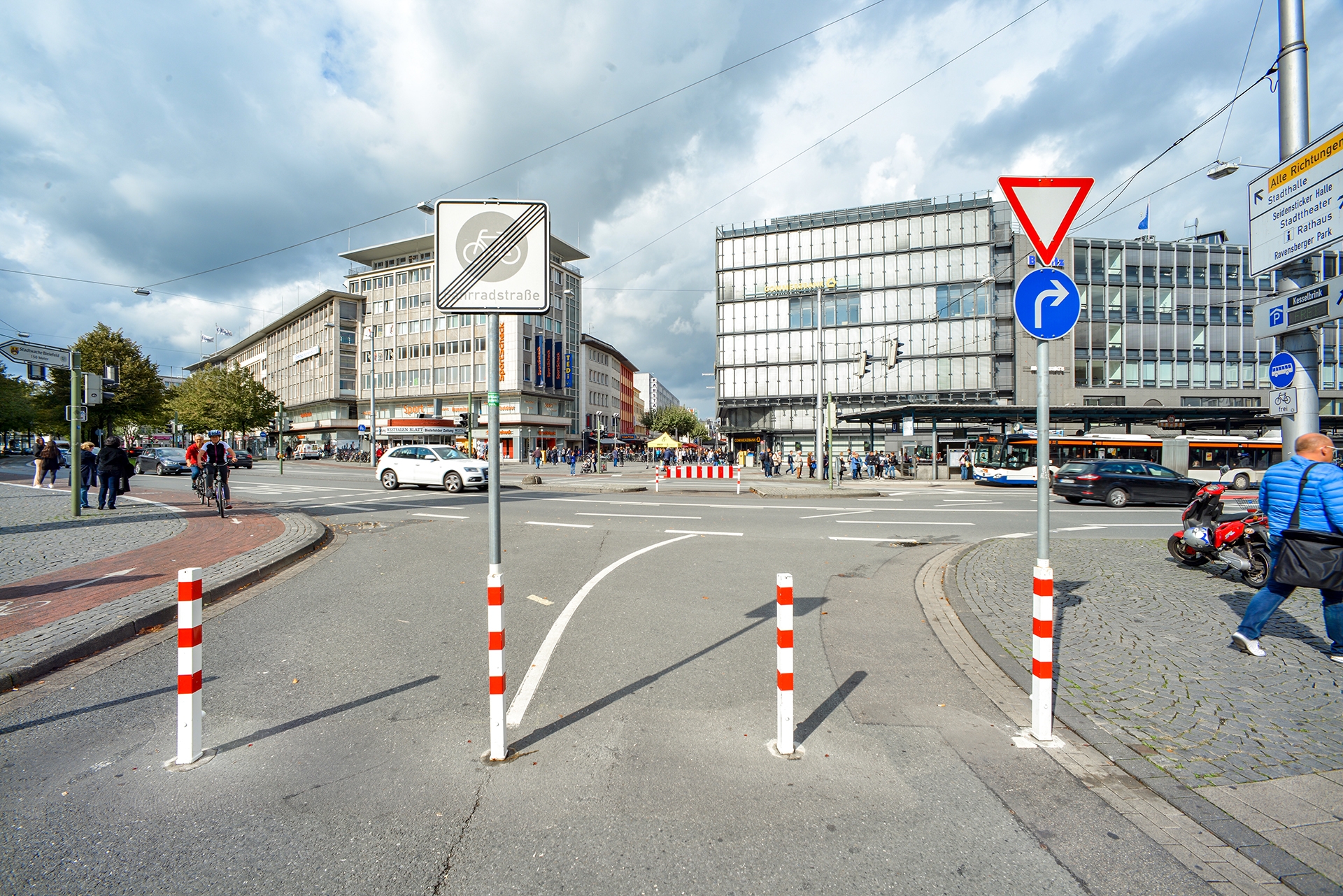 By the end of June 2018, the city was ready to start the pilot, after having already installed the physical changes needed. These included bollards to cut off the connection from the Jahnplatz to Niederwall Road, traffic signs announcing the change in use of one lane in each direction and improving cycling connections by reconstructing a traffic island. Costs for installing the pilot were well below EUR 10,000.

In parallel, the city administration started to prepare for the long-term modification of the Jahnplatz based on the concept and results of the pilot phase. The main aims of the modification were to create a high-quality public space where people would want to stay, to meet current and future demands for sustainable mobility modes, to provide significant space for active transport modes and to ensure that the Jahnplatz was able to periodically host events. Traffic routing made use of the ‘Copenhagen Model’ referring to the successful strategy of the Danish capital in promoting cycling by providing infrastructure and traffic management elements. The preparation of the permanent changes was accompanied by public consultation events.

The pilot was monitored continuously to ensure a smooth traffic flow and the functionality of the square. Political discussions focused on adding details to the plans for the long-term changes during the second half of 2018. Additionally, applications for external funding sources to implement the long-term modification of the Jahnplatz were prepared and submitted in spring 2019.

The city undertook two consultation events in October 2019 – one for the general public, and one for stakeholders and neighbours of the Jahnplatz area. Discussions at the events, which involved 120 participants, concerned the traffic scheme and the changes to the public space in the Jahnplatz.

In December 2019, the Bielefeld City Council adopted the modification plans for the Jahnplatz and set the construction start date as July 2020. The city administration developed the detailed technical plans and prepared tendering for the construction works.

A public information event in February 2020 discussed these plans with 80 participants, which presented the changes made as a result of the public consultations and the timeline for the construction phase, which will be from July 2020 to June 2022.

In March 2020, the detailed technical plan for the traffic infrastructure of the Jahnplatz was adopted, which began the tendering process for the construction works.

The pilot phase for the redesign of the traffic scheme was a success. The main challenges – the excessive concentrations of NO2, the traffic volumes of individual motorised vehicles and the resulting domination of the public space – were addressed as the following changes demonstrate:

Bielefeld started an EU-wide tendering process for the full reconstruction of the Jahnplatz based on the pilot scheme, as well as integrating other aspects important to urban space, such as lighting. The tendering ran for one month. The winning bid was contracted to undertake the reconstruction – the first phase started on 6 July 2020.

The City of Bielefeld is documenting the reconstruction process and all of the previous steps (starting with the first decision to reduce individual motorised traffic in the Jahnplatz) on a dedicated website. Click here to access the website (in German).

The reconstruction of the Jahnplatz was, and to some extent still is, a controversial issue that is much discussed by the public and between political parties. Stakeholders had different views on the effects of a reduction of individual motorised traffic on the Jahnplatz itself, and in the neighbouring commercial and residential areas.

Due to the controversial opinions and the uncertainty of the outcomes of a change to the Jahnplatz, the City Council decided on a pilot phase to test a new traffic scheme, supported by public consultations on the development of the new permanent modifications to the Jahnplatz. Both elements were successful – the pilot phase showcased the effects of the changed traffic scheme and, through the consultations, the most important concerns and needs of residents, businesses and other affected stakeholders were addressed.

Low costs, and the positive effects on emissions concentrations and traffic volumes make the pilot phase approach to drive changes in the traffic scheme on the Jahnplatz a success story that can be adopted by other cities.

The website documenting the process to redesign the Jahnplatz is accessible here (in German).