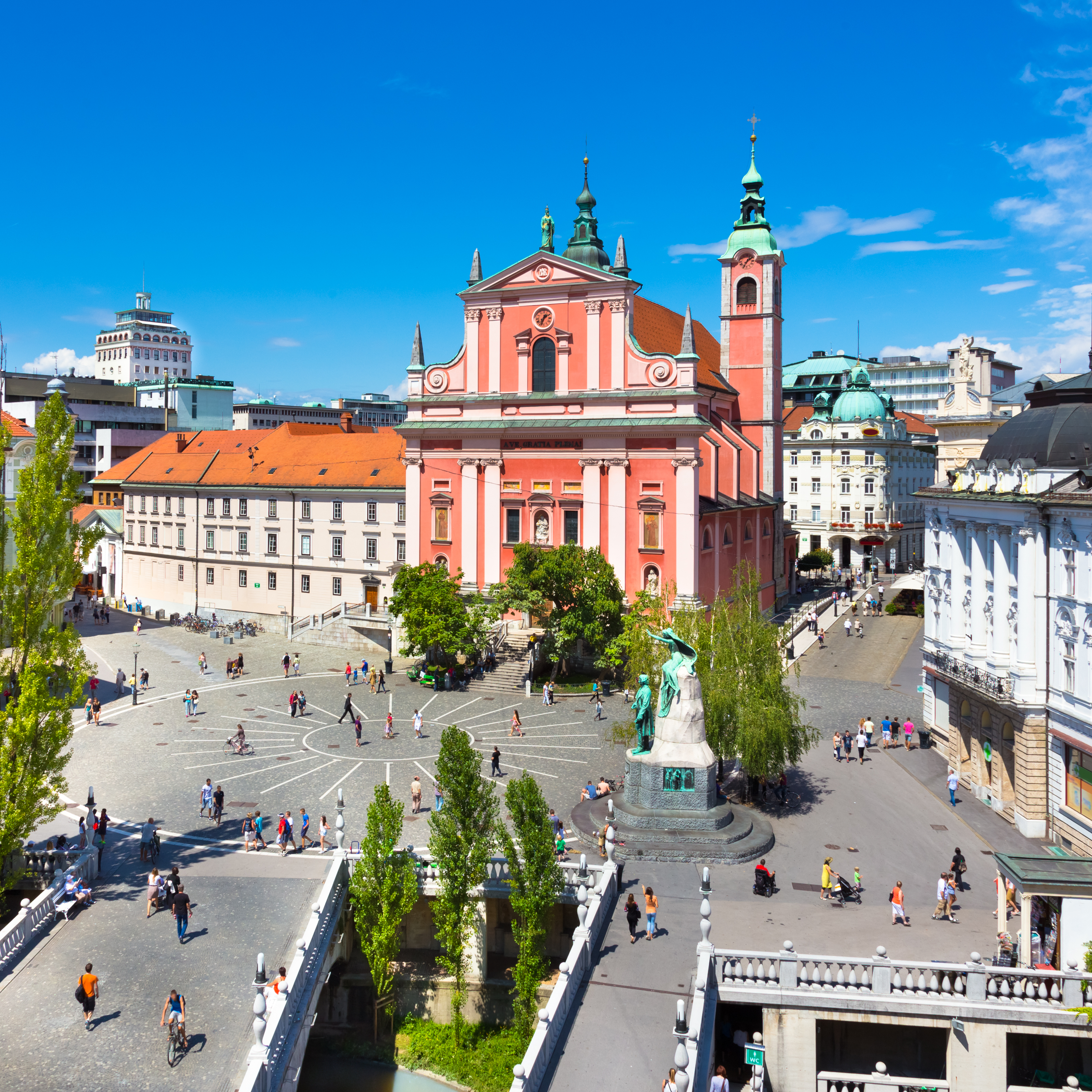 Ljubljana is now recognised as one of the most beautiful places to visit in Europe. However, the positive image of the city did not come about by itself: it is the result of a large-scale process of change that Ljubljana has delivered over the last 12 years.

Back in 2006/07, a sharp rise in motorised traffic resulted in more and more car trips on the streets, even in the very heart of Ljubljana, the famous Triple Bridge and Prešeren Square.

In response, in 2007 the city adopted its Vision 2025 with the aim of becoming a sustainable and enjoyable city to live in. Part of the vision was to convert the city centre from a place dominated by motorised traffic to a pedestrianised area that would attract residents and visitors alike. The changes to public space started at the very centre of the city with motorised traffic being banned from Prešeren Square and the connected Wolfova Street, with the space being given to pedestrians and cyclists instead. Over time, more and more projects to pedestrianise the centre were successfully implemented, such as the Kongresni Market project in 2011 or Slovenska Boulevard in 2013-2015.

Ljubljana also revitalised the riverbanks of the River Ljubljanica, which runs through the city centre, and improved access between the two banks of the river by renewing existing crossings and adding new pedestrian bridges. These projects were complemented by the creation of high-quality public spaces. The final elements of the vision were to connect the pedestrianised network in the city centre to Tivoli Park to the west of the centre. Today, the pedestrian area of Ljubljana covers more than 10 hectares. The pedestrianisation process has been supported by residents and other members of the public, as it receives an 88% – 95 % approval rating.

The main success factors were political support and continuity, communication with inhabitants and stakeholders, and learning from and implementing actions in the framework of EU projects, as well as a lively civic society engaged in the improvement of public space in Ljubljana.

Ljubljana is the Slovenian capital and is today home to 288,250 inhabitants. It is in the centre of the country, home to 43,000 students and provides its residents and visitors alike with a culturally vibrant environment coupled with an architectural heritage. However, until 2007, the ability of people to enjoy the city centre of Ljubljana was limited due to the high volume of motorised traffic present on almost all roads. At this time, each day cars and lorries crossed the River Ljubljanica, which runs through the city centre, using Plečnik’s famous Triple Bridge. A 2003 survey found that almost 60% of all trips in the city centre were made by car.

In 2007, the ‘Vision for Ljubljana 2025’ was introduced by the new Mayor. The vision aimed at transforming Ljubljana into a sustainable and enjoyable city within less than 20 years. Ljubljana’s aim was to become a city that “nurtures history, ensures life quality, safety and tolerance, is environmentally friendly and connected to its landscape”. The vision intertwined the concepts of sustainable development and urban planning in a close and harmonious way. It included, amongst other objectives, the promotion of sustainable mobility, the creation of more green space, zero waste and sustainable energy plans, which were the basis for a series of infrastructural and organisational projects. Following the idea of putting people’ needs at the centre of any strategy, the transport section of the policy aimed to turn the transport modal pyramid on its head – from most trips being undertaken by car to most trips being taken on foot. Consequently, cars started to be restricted from the inner city from 2007 onwards.

Ljubljana took a stepwise approach to closing streets and squares to motorised traffic resulting today in a traffic-calmed area of over 10 hectares in the city centre. Public space was turned into pedestrian and cycling space to create a liveable inner-city area. The connectivity of both sides of the river running through the city centre was improved by the construction or renovation of bridges.

From 2007 changes started with the renovation of Wolfova Street and Prešeren Square. These changes went beyond the more usual actions of simply improving pedestrian conditions by banning access to motorised traffic from these two areas. Motorised vehicles were restricted for the first time with the only exception being for deliveries, which required a service permit valid from 6 am to 10 am.

Another major step was taken in 2011 with the transformation of Kongresni Market into a pedestrianised area. The square’s redesign took into account the historical setting of the area and followed the requirements of the Slovenian Institute for the Protection of Cultural Heritage. Removing cars from the area, including parking spaces, resulted in a need for other parking solutions for residents and visitors. This was resolved by replacing street-level parking with a new underground car park directly beneath Kongresni Market. The garage provides 720 parking spaces and almost half of these are reserved for residents of the now pedestrianised area.

Starting in 2013, the city refurbished a main traffic artery close to the city centre, Slovenska Boulevard. That year first saw a temporary re-arrangement of a 400m-long stretch of the road, which was given over to pedestrians, cyclists and city buses. Following urgently needed sewage works, this part of Slovenska Boulevard was permanently transformed into a shared space solution for active mobility and public transport. The conversion included greening activities such as planting more than 60 new trees. Later on, Cankarjeva Street which crosses Slovenska Boulevard was turned into a pedestrian route connecting the city centre and the Tivoli Park area located to the west of the centre.

Over time, Ljubljana has addressed the differing needs of walking and cycling, rather than motorised traffic. Pedestrians and cyclists are more sensitive to detours, and therefore more options were needed for pedestrians and cyclists to cross the river in the heart of the city centre. At the same time, this allowed for the revitalisation of the riverbanks on both sides. The City of Ljubljana renovated its bridges focusing on the needs of active mobility and constructed new crossings such as the ‘Mesarski Bridge’, about 150m east of Plečnik’s famous Triple Bridge. In total, the works related to 13 bridges, of which seven were brand new constructions.

In order to help residents with reduced mobility face the challenges of the large scale pedestrianisation of the inner city, Ljubljana also installed the free-of-charge “Kavalir” service in 2009. Today, the six electric vehicles with five passenger seats that provide the service are available to any user and their routes are selected according to their users’ needs.

Ljubljana also significantly invested in the promotion of cycling. In a rather rare move, cyclists are allowed to cycle in the entire pedestrianised area of the city. The co-existence of cyclists and pedestrians is based on mutual acceptance and consideration and is considered to work well. While there are no real limitations to cyclists using the pedestrian area, signposting at critical points reminds cyclists to consider the safety of pedestrians.

Moreover, since 2011, Ljubljana has a functional and popular bike-share scheme, which registers over 900,000 trips per year, and can be used via the integrated public service card URBANA. The city also invested in Park + Ride facilities to allow commuters to reach the centre by public transport. Today, five facilities are in service. Travellers can also use their URBANA card for two bus rides valid on the day of purchase for the price of €1.30. 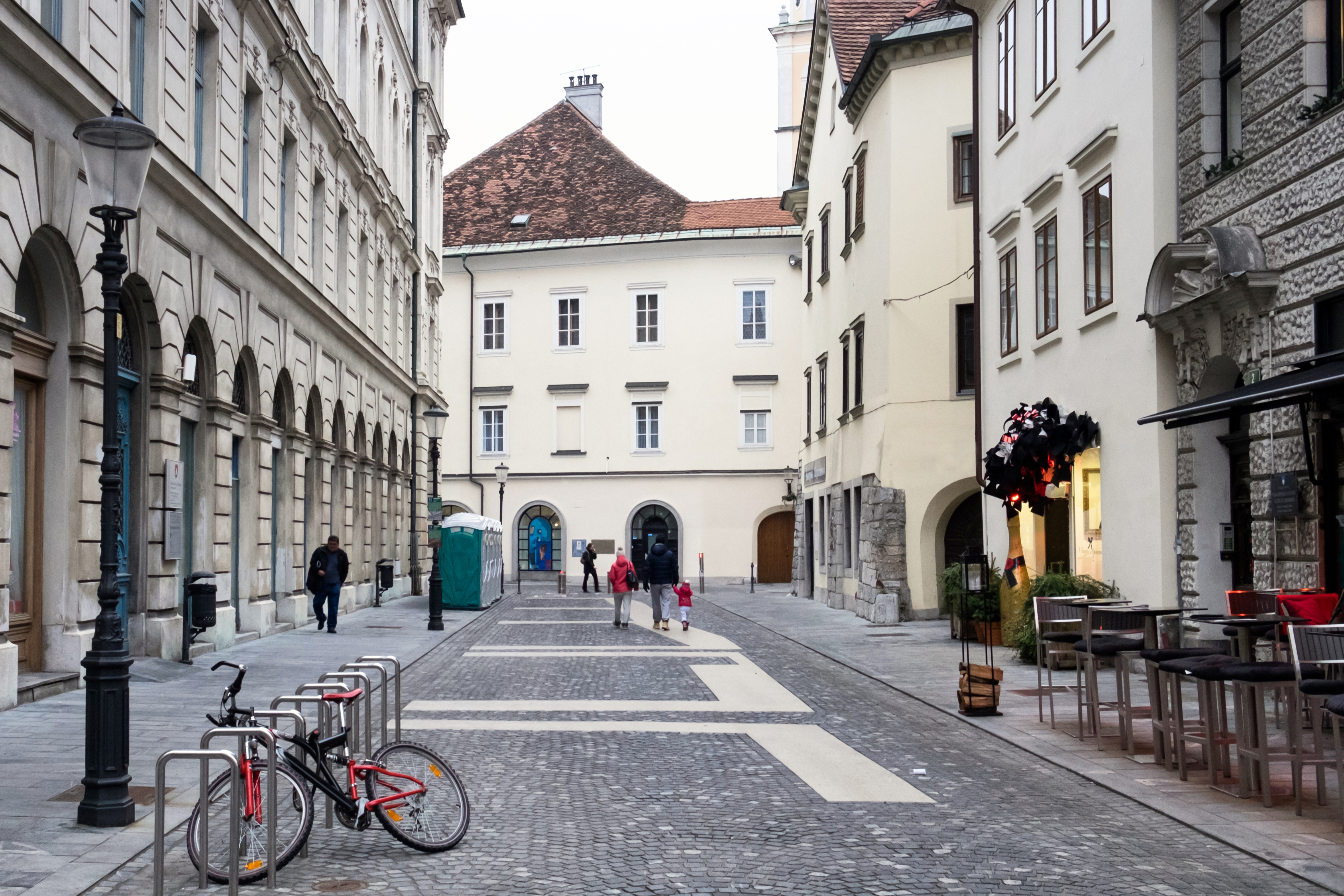 The most significant changes are directly visible in the city centre – the pedestrian zone, closed to motorised traffic, has been increased by 620% since 2007 and now covers approximately 10 hectares with an additional 3 hectares pedestrianised but still accessible to local traffic. Ljubljana’s city centre now offers more high-quality public space for different cultural and sports events, business development, or just for socialising and spending time. Fears that the large scale pedestrianisation would negatively impact local businesses have proven to be unfounded. On the contrary, businesses and tourism have both benefitted in the historic centre.

Following the large-scale pedestrianisation, the environment in the city centre has improved dramatically. In the case of Slovenska Boulevard, an evaluation of emission levels shows that black carbon emissions have been reduced by 70%. Furthermore, the changed traffic patterns did not result in poorer air quality in adjacent streets. Noise levels in the whole area dropped by around 6 dB.

A mobility survey undertaken during the development of the city’s latest SUMP highlighted the high acceptance of the pedestrianisation policy: about 95% of people support the measure and plans for its extension are also seen as positive. The Slovenska Boulevard redesign also met with high public support, as it had an approval rate of 88% in the same survey.

The impact of the pedestrianisation policy is also evident in changes to the modal split in Ljubljana. Compared to almost 60% of individual trips being motorised in 2003, this share had reduced to 42% by 2013. Walking increased from 19% in 2003 to almost 35% in 2013. Ljubljana is thus progressing well in meeting its modal split goals for 2020, which aim for only 33% of all trips being undertaken by motorised vehicles. The “Kavalir” service, which takes care of persons with reduced mobility in the pedestrian area, is well accepted and used – by 2017 it had transported more than 1.2 million passengers.

The City of Ljubljana has gained public and international recognition for its pedestrianisation strategy: in 2012, the city was awarded the “European Prize for Urban Public Space” for its rearrangement of the River Ljubljanica embankments and bridges. In 2016, Ljubljana was named as the “European Green Capital” by the European Commission. This title proved to be a valuable marketing tool to attract tourists and raises the city’s profile in other EU cities. In 2003, and then again in 2013, the city won the prestigious European Mobility Week Award.

Ljubljana’s success story is based on a mix of factors: strong political leadership and learning from experience in international exchanges and projects, as well as lively local civic society groups.

The changes to the inner-city began in 2006 during the term of office of Ljubljana’s current Mayor, Zoran Janković. The Mayor initiated the Vision 2025, which served as the basis for the large-scale changes. The actions leading to the closure of the city centre to motorised traffic started during his first year in office, in order to allow people to experience the benefits, such as safer streets, more attractive public space and better air quality well ahead of the next election. Moreover, the way in which some projects, such as Slovenska Boulevard, were planned and delivered was used to test how residents reacted to a potential road closure.

Communication with residents and stakeholders was another key aspect behind the high acceptance rates for the changes to Ljubljana’s city centre. At the very start of the removal of motorised traffic, the plan was controversial. However, staying true to the objective, communicating and getting people to use the converted space by putting on events turned the initial negative attitudes to today’s support.

Ljubljana has also regularly taken part in European projects connected to urban mobility, such as leading the CIVITAS ELAN project between 2008 – 2012. Through these projects, the city became familiar with EU-wide best practice examples and solutions to urban mobility challenges, and was able to adapt and use new mobility solutions for Ljubljana.

Moreover, Ljubljana’s changes benefitted from a lively local civic society that was also interested in changing the city. Such organisations led projects to transform public space, such as Tabor Park, which was converted from an abandoned area to a well-used green space by hosting events and festivals as well as being used as a space for temporary gardening.

Visit the website of Ljubljana dedicated to walking in the city: