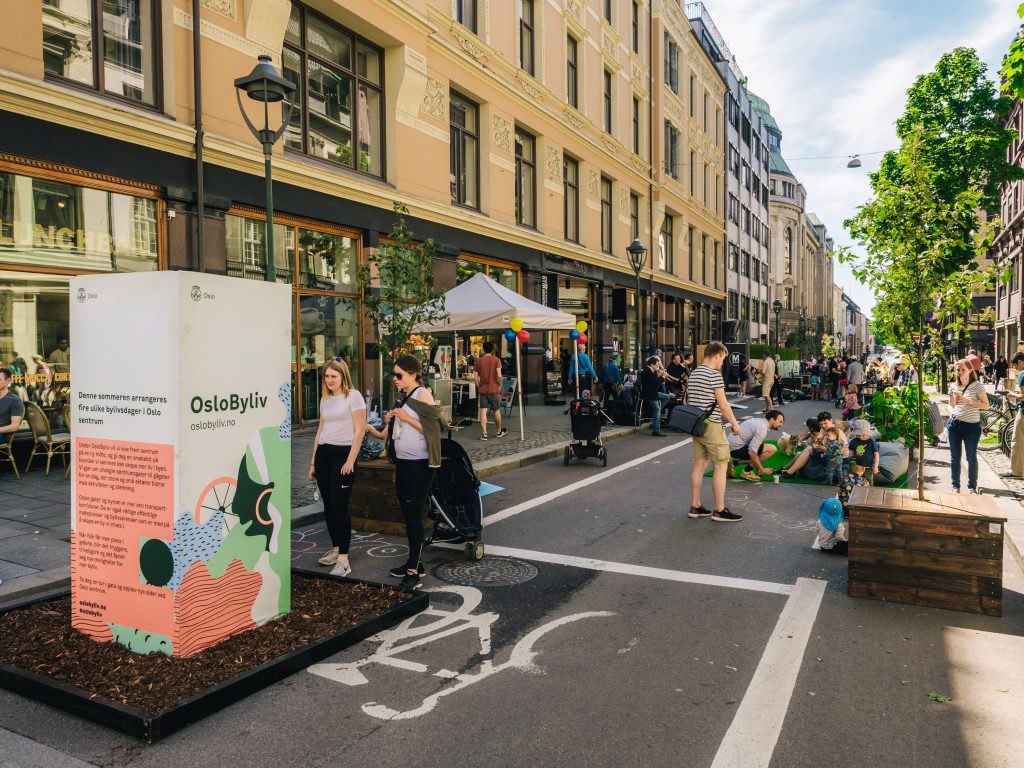 As with many cities in recent decades, the Norwegian capital, Oslo, was increasingly giving up urban space to cars. Since the 1960s, massive road building schemes were undertaken to accommodate the explosive growth in the ownership and use of private cars. However, the ever-increasing growth of the capital over the past decades, its projected continued growth, and mounting worries over poor air quality and climate emissions, forced new thinking on planning and catering for mobility to protect the environment and improve the quality of the city for its inhabitants.

The course that Oslo has taken to change the hierarchy of urban activities and modes of mobility, including prioritising people over cars, is unlike that taken in other cities. With the range and scope of its measures, which have at times been bold, Oslo provides a unique and interesting example of an integrated approach to city development. Oslo’s Car-free ‘Livability Programme’ is a crucial factor in the strategy to create a greener, livelier and more inclusive city.

In 2015, a new city administration came into office and set an ambitious agenda to halve greenhouse gas emissions by 2020, become fossil fuel free by 2030 and to make Oslo an even better place to live. At that time, transport accounted for some 60% of the city’s carbon dioxide (CO2) emissions with almost 40% coming from private cars. A key part of the strategy to achieve the new objectives was to reduce car traffic by 20% by 2019 and by 33% by 2030 (compared with 2015 levels). Continuing to facilitate mobility whilst achieving these objectives would require significantly increasing the share of public transport, cycling and walking.

In 2014, the ‘Public Space Public Life’ (PSPL) survey was commissioned by the city. It concluded that, despite the city’s compact size, much could be improved in the connectivity and accessibility of urban spaces (especially for walking and cycling) and in relation to the quality of space. In response to these challenges, Oslo launched the Car-free ‘Livability Programme’ in 2016. Its purpose was to create a greener, livelier and more inclusive city by reducing traffic and space for private cars in the city centre during the 4-year mandate of the City Council (2015-2019).

The initial intention of the Car-free ‘Livability Programme’ was to impose vehicle access restrictions. These would prohibit most vehicles from driving through the part of the city centre confined within Ring 1, the innermost of Oslo’s three motorway ring roads which has an area of approximately 1.7 km2. With just under 1,100 residents (in 2015), it is not a major residential area. However, it is a centre of activity and hosts around 90,000 jobs (2015), facilitating the central railway station, Oslo’s main commercial streets, shopping malls and major nightlife districts.

Although car ownership (around 15%) and the share of cars commuting to the centre (around 10%) are low, the proposed car-free zone in the centre faced significant opposition, especially from businesses. Therefore, the city decided to change its approach to a more gradual one, which aimed at having the least possible number of vehicles in the centre instead of having a car-free zone.

In a limited number of pilot areas, including Dronnings gate and Fridtjof Nansens square, measures were introduced to encourage pedestrian-friendly areas prioritising culture and city life. People in Oslo were invited to provide their input – these included representatives of leisure clubs, cultural groups, businesses, restaurants, senior residents, the young, and people living, visiting and working in the centre. They could share views and launch ideas during a range of meetings, presentations and online via the municipality website. A variety of measures – large and small, temporary and permanent – were implemented. These included creating terraces and playgrounds, placing mor 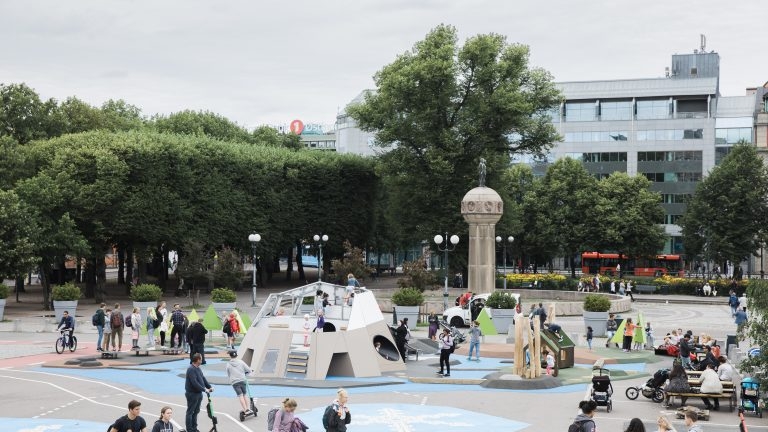 e street furniture (such as benches and trees in planters), using art in urban spaces, organising events and improving amenities (such as water taps and public toilets).

Phase two of the Car-free ‘Livability Programme’, implemented in 2018, was the stage introducing the most changes. It was also the year Oslo commenced the implementation of its ‘Action Plan for increased City Life 2018-2027’, which was commissioned by the City Council as a follow-up to the PSPL survey.

To improve city life, it was recommended that the City Council commence work to improve connections to and through the city centre (area within Ring 1) to increase interaction and synergies between target points in the city, and to highlight and encourage the use of hidden urban spaces. These recommendations were included in the Car-free ‘Livability Programme’.

Traffic routes through the city centre were altered and several streets were closed to vehicles, although some exceptions were made for goods deliveries and parking for the disabled. In addition, the pedestrian network was extended, new bike lanes were created and the number of on-street parking spaces was further reduced. The City Council also continued to cooperate with local stakeholders to develop and implement an annual calendar of activities and events.

The activities, events and works to implement the Car-free ‘Livability Programme’ continued in 2019 (Phase 3 and the final year of the programme). The total number of parking spaces that were removed was almost 800, while the first major physical street renovations were completed in Dronnings gate and Øvre Slottsgate. The City Council also evaluated the entire Car-free ‘Livability Programme’ in 2019. Even though it moved away from its initial idea of creating a car-free city centre, the City Council indicated that it would continue to assess whether access restrictions were necessary to reduce traffic.

Oslo has decided to continue the gradual approach adopted in the Car-free ‘Livability Programme’. Since its adoption, the Action Plan for increased City Life 2018-2027 has provided the strategic direction for implementing the Car-free ‘Livability Programme’. Further investments after 2019 have been linked to the implementation of the Action Plan and to the Area Regulation of Streets and Urban Spaces in central Oslo. The latter is the city’s zoning plan, which was adopted in 2019. This is the long-term plan to further improve accessibility for cyclists and pedestrians, and provide descriptions of the measures that will be implemented to facilitate car-free city life.

To assess the results and learn from the experience of the Car-free ‘Livability Programme’, evaluations were conducted during each year of the programme, comparing the results with the ‘baseline situation’ at the start of the programme. It was concluded that the Car-free ‘Livability Programme’ had a clear local effect and, even if some traffic had moved to alternative routes, the measures were likely to have contributed to an overall traffic reduction in Oslo by making driving and parking in the city centre more difficult.

Traffic data collected as part of the evaluations showed that within the city centre, car traffic reduced by 11% in the period 2016 to 2018, and by 19% between 2018 and 2019. Surveys also revealed that the measures have not impacted on origin-destination patterns within the city centre, although drivers are making fewer trips by car, while the occupancy rate has increased from 1.41 to 1.85 passengers per vehicle.

It has been difficult to establish the effect of individual measures. Furthermore, in addition to the measures implemented through the Car-free ‘Livability Programme’, several others have been implemented within and outside the project area, which may have also affected traffic in the area. These include introducing new ‘toll rings’, time- and environment-differentiated tariffs on the ‘toll rings’, and construction work in the city centre. Although it is likely that these measures have also had an impact on traffic during the evaluation period, it is assumed that the effect has been synergetic in reducing the number of cars in the centre.

Annual random surveys of the number of pedestrians in various streets and the number of people spending time in different urban spaces show an overall increase (14% and 43% respectively) over the period of the Car-free ‘Livability Programme’. At the same time, overall figures from the travel habits survey for Oslo’s city centre show that the share of pedestrians is stable, while the share of public transport and bicycles has increased slightly, and the share of vehicles has decreased. Since the pedestrian counts were conducted during short periods and do not cover the same areas as the travel habits survey, it is uncertain whether the increase in pedestrians in the surveyed streets is a trend or random variation.

According to polls, more than 50% of the inhabitants of Oslo are now open to a city centre with fewer vehicles, and this share has been increasing over the years. After a period with trials, testing and construction, it is only now that people are able to see and experience the results. The majority of people are also positive about the future prospects of a car-free city centre and how it can attract more people to the area.

The most criticism relating to the objective of a car-free city centre has probably come from people in the business community. Their key concerns have been over potential problems with their supply logistics and, particularly, a fear of losing customers. Research by the City Council has shown that, although there has been a decline in retail turnover, this decline was due to broader trends within the economy, and turnover in the city centre was at the same or even higher levels than in competing areas outside the car-free zone.

The Car-free ‘Livability Programme’ has generated interest and curiosity from all corners, especially since Oslo was awarded the European Green Capital Award 2019. Oslo has shown that it is possible to quickly and effectively reduce the number of cars in a city centre, and 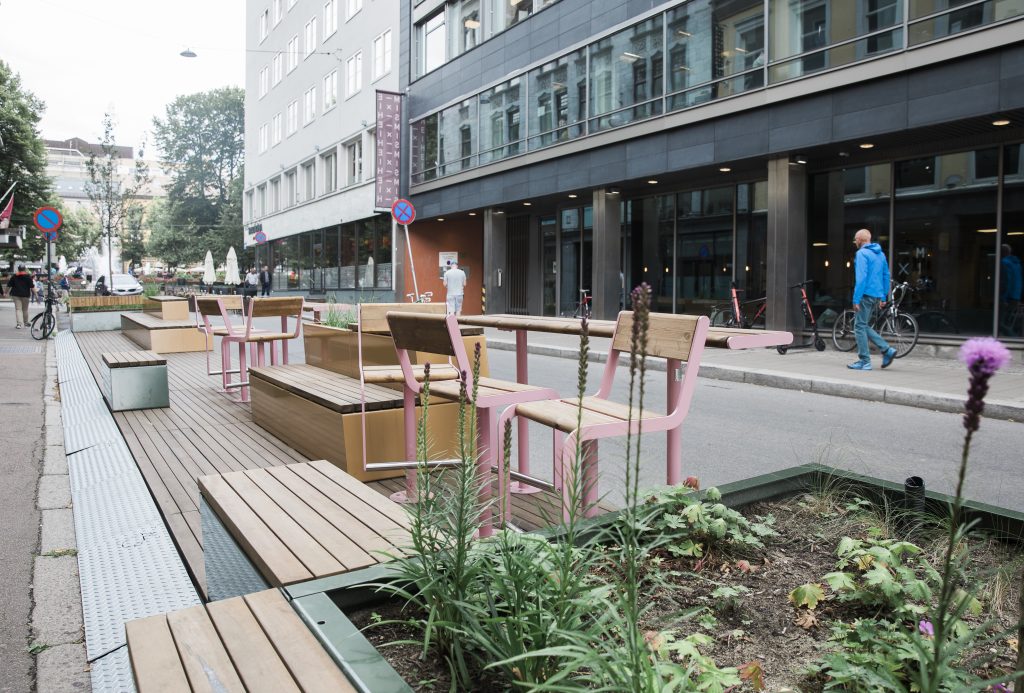 to prioritise pedestrians, cyclists and public transport users while making the city greener.

Still, Oslo’s efforts to improve city life have not only provoked enthusiasm, but also resistance. Some of this resistance is attributable to a sense that the changes are happening too quickly and without sufficient information or public engagement. The focus in the early stages of the Car-free ‘Livability Programme’ on removing car parking spaces and reducing car access triggered resistance. While the perceived downside of the plans (such as reduced car access for visitors and residents, and problems in logistics) became quickly apparent, the upside (a liveable city) received less attention. In addition, members of the business community in particular felt that their contribution to city life (such as trade, jobs and shopping) was taken too much for granted, while their concerns received insufficient attention.

Oslo has responded by adopting a gradual approach to continue with the transformation of the urban centre where cars will become subordinate to pedestrians, cyclists and public transport. Reducing car use is not an objective in itself, but merely a means to help achieve a greener and cleaner city. In this way, measures to reduce car use have become part of a wider strategy to improve urban life.

Even more careful consideration is being given to ensuring that reducing car use in the city works for the benefit of everyone. This means ensuring that the city remains accessible to everyone. Oslo has shown that by investing in public transport and cycling infrastructure, these modes can provide a viable alternative to private car use, especially in densely populated areas.

Without doubt, Oslo provides an inspiring example of how urban space can be shared between users. Oslo is actively working to improve urban logistics. Many of the reclaimed parking spaces have been made available for goods deliveries. In addition, the number of disabled parking spaces in the city centre has increased and Oslo continues to cooperate with interest groups for the elderly and people with disabilities to further improve street design and facilities. Finally, the Car free 'Livability Programme' has been an arena for innovation and learning.

Through experimental and exploratory urban space projects, Oslo has highlighted the city’s potential and set interesting examples for others. Continuous monitoring and evaluation has provided Oslo with useful information on the immediate effects. As experience builds and new initiatives are implemented to promote walking, cycling and public transport, the City of Oslo will continue to be a city to watch in the future.