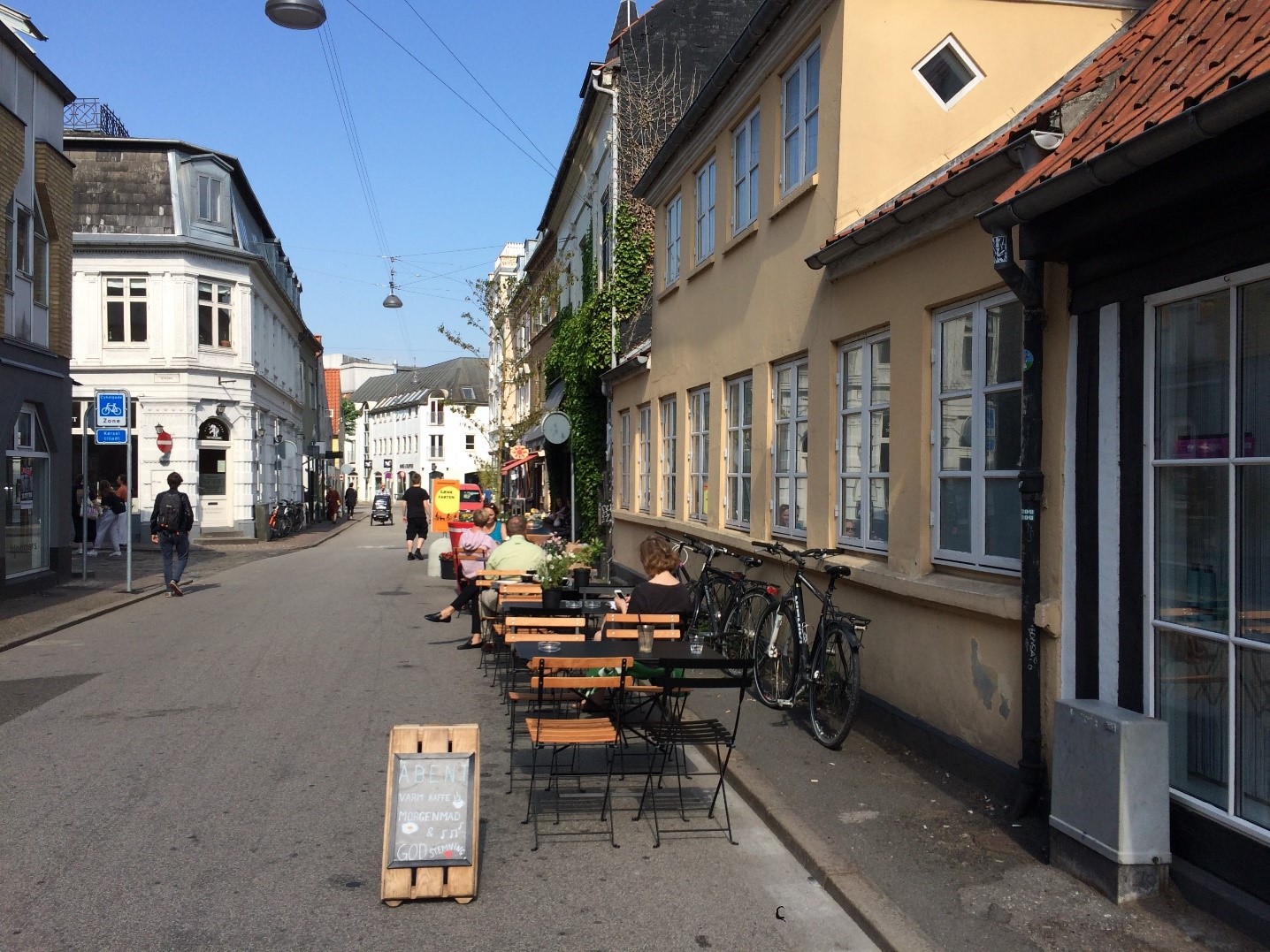 As a part of the “Summer Pedestrian Street Pilot Project”, two streets in Aarhus; “Graven” and “Vestergade” were converted into pedestrian streets from June 2019 to October 2019. The project’s objective was to enhance the liveable urban environment by creating living and green streets. This will contribute to the project's objective by making sustainable transport attractive and easy to adopt. This case study has been created as a part of the cities.multimodal project.

During the cold months “Vestergade” is an ordinary inner city street with many cafés and smaller companies. The speed limit is 50 kilometres per hour. “Graven” – which is one of the oldest streets in Aarhus is a cycling street with mixed traffic. The cars on "Graven" must adapt to the speed of the cyclists.

In order to accomplish the anticipated and outcomes, the two streets were opened for pedestrians and the speed limit was reduced. The streets and pavements were used to facilitate activities that underpinned a good and liveable urban environment. For instance, cafés, restaurants and bars had their outdoor service moved to the lanes of the streets. Also, the streets were decorated with plants and trees which contributed to a greener urban life. At the same time, the entire streets were transformed into a pedestrian zone with new signage. Both cars and bikes now had to follow the pace of pedestrians. The speed limit was set to 15 kilometres per hour, and even the new shared e-scooters were coded to not exceed this limit.

Along Vestergade – on the one-way asphalt road with narrow pavements, there are cafés, second-hand shops, board game cafés, businesses and diverse eateries. Despite many different types of business enterprises present, Vestergade is not a particularly busy street. Pedestrians, cyclists and drivers can move through the area relatively smoothly even though the general traffic is affected by business-related traffic.

As a summer pedestrian street, Vestergade has a relaxed atmosphere. More pedestrians and cyclists use the street. Families, including families with prams, also use the street, which now also has outdoor tables and benches on the road. Not all the pedestrians realise they can use the road, i.e. they still use the pavement. The speed of vehicles is also an impediment to curious pedestrians using the road. However, the new street flowers move merrily around, as by-passers think it’s fun to move them about.

Graven is considered to be the main artery of the Latin Quarter. The one-way asphalt road with narrow pavements and colourful buildings functions as a link to the surrounding streets. In Graven, local residents of Aarhus live side-by-side with local coffee shops, second-hand stores, art rooms and other specialist stores. Cyclist pass by the many cafés and restaurants at high speed when they use the road as part of their cycle route. Even though the street is busy, with curious pedestrians and busy traders, many people use the grassy area known locally as “Hipster højen” (Hipster mound), especially young people who play music and drink there. Because the street has many functions and users, traffic easily comes to a standstill and requires behavioural adjustments. For example, commercial vehicles affect the pattern of traffic in the street.

As a summer pedestrian street, Graven has more pedestrians and visitors to the various café’s, restaurants and stores. The sound of bells ringing and car horns have become part of the street’s characteristic, an indication that pedestrians, cyclists and drivers have difficulty finding space for themselves. The black asphalt road is now more varied, as the pedestrians stroll on the road, moving around the café tables and chairs. One of the traffic situations that creates a disturbance during the day, is the movement of commercial vehicles. The extension of the pavement has meant that the road has become narrower, and there are new requirements relating to how you can move on Graven when it is a summer pedestrian street.

During the campaign, an evaluation has been carried out using observation, interviews and counting. Community councils, traders, residents, cyclists and pedestrians were chosen as a target groups for the evaluation. Surveys were carried out in week 35 and 36 in 2019.

The evaluation was done in the following steps:
• Mid-project evaluation in August 2019, in the form of focus groups with the Joint Council, representatives of local residents and the business community.
• Street interviews with pedestrians and cyclists in calendar week 35 in 2019.
• Link to a questionnaire issued via local people’s network and channels on social media in calendar weeks 35-40.
• Link to a questionnaire distributed to the business community/owners and leaseholders via e-Boks in August and September.

During the evaluation process 103 resident surveys, 69 cyclist interviews, 56 trader surveys and 131 pedestrian interviews were undertaken. Both negative and positive experiences were shared by the respondents, such as the increased opportunity to sit outside, cars driving more slowly, fewer cars, more people on the street and better atmosphere were mentioned as positive changes, while more noise, conflicts between cyclists/pedestrians and drivers/pedestrians and loss of privacy were mentioned as negative changes. The majority of respondents were, however, in favour of repeating the project the following year.

The following recommendations, based on the evaluation report, are being followed for the replication of the Summer Pedestrian Streets in 2020 and can be considered as relevant for the wider transferability of the action.

Recommendations and actions with repeat of pilot project in 2020 based on the evaluation (users, residents and traders):

• Introduce tactile speed restrictions.
• Hold a joint inspirational meeting involving all of the streets’ stakeholders.
• Operation and maintenance of street furniture must be prioritised.
• More permanent solutions in Vestergade.
• Residents want Graven to be a permanent pedestrian street.
• Improved signposting and guidelines for how to move through the area.
• Focus on parking issues.
• More focus on noise issue from the increased serving of people outside close to residential properties.
• Agreements with stakeholders must be more clearly framed in user agreements.
• Early involvement of residents and traders.

Recommendations and actions for the repeat of the 2020 pilot project from the perspective of Aarhus Municipality Employees:

• Start planning as soon as possible.
• Provide clearer guidelines from the municipality about how the streets must look, be used and be kept clean.
• Evaluate whether a street can be converted to a permanent pedestrian street.
• Signs must be devised based on inspections of the streets.
• The 'Events Unit', 'Permit Unit' and 'Mobility Unit' must agree on a framework for cooperation.
• The focus on the greening of the area must be strengthened.
• Involve the 'Permit Unit', 'Environment Unit' and 'Business Unit' in the planning.
• Undertake physical inspections early on in the process with 'Permits Team'.
• Improved signposting and guidelines for how to move through the area.
• Remember to consider parking issues.
• Focus on noise issue from the increased serving of people outside close to residential properties.
• Focus on engaging with street associations via user agreements.
• Hold a meeting with the Joint Council and the Business Council to align expectations, two months before starting the initiative.
• Communicate on Facebook, as this functioned well and should be repeated.
• Be aware of how the summer pedestrian street pilot project and the bicycle lane system with cyclists at high speed can function.
• The summer pedestrian street pilot project must be able to facilitate the delivery of goods.
• Include people who park cars in the preliminary meetings.

This case study was created as a part of the cities.multimodal project and based on a report by