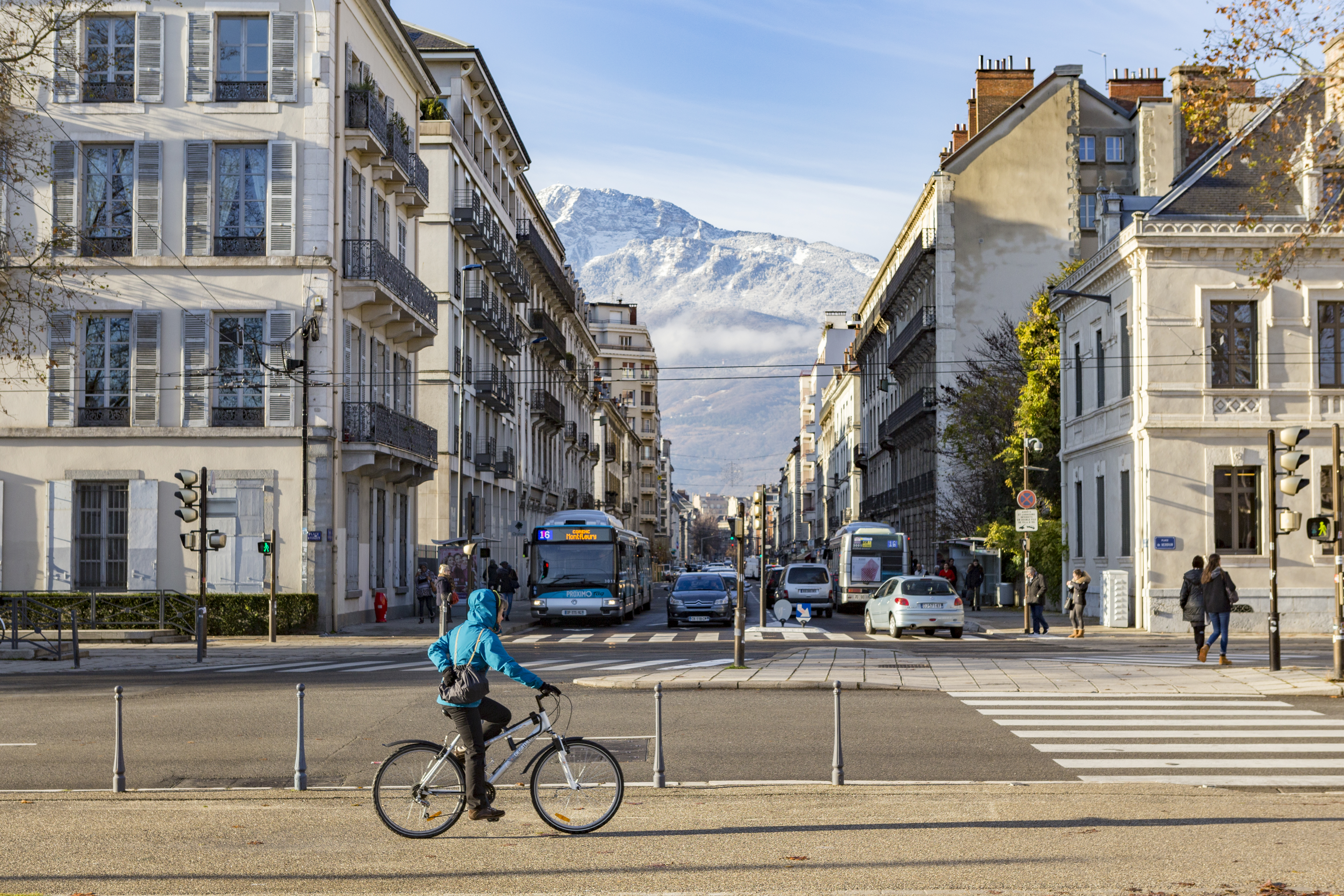 In order to win the 9th Award for Sustainable Urban Mobility Planning (SUMP Award), the Greater Grenoble Area Mobility Authority (SMMAG) presented an extraordinary case, by combining strong ambitions with a detailed action plan until 2030. The 9th SUMP Award, that focused on the theme of ‘zero emission mobility for all’, was given to the Grenoble-Alpes Metropolitan Area, as it highlighted ambitious aims, including plans to significantly reduce the pollution derived from transport. Amongst the finalists of Bilbao (ESP) and Belgrade (SRB), SMMAG presented a SUMP, which aims to meet the mobility needs of all public transport users, including socially vulnerable groups, as emphasised by the SUMP Award Jury.

Home to more than 450,000 inhabitants, and one of the largest metropolitan regions of the European Alps, Grenoble offers a great mobility mix between public transport, including trams and buses, as well as good cycling infrastructure. The latter might be a surprising fact for an urban area surrounded by steep mountains. Located along the riverbed of the Isère, the Grenoble-Alpes Metropolitan Area has a relatively flat profile, which offers ideal conditions for cyclists and pedestrians. Grenoble, the host city of the 1968 Winter Olympics, is also home to several universities and large companies, such as Caterpillar and Schneider Electric, thus, it offers the ideal combination between a productive city and a city adjacent to Alpine nature. Furthermore, the urban agglomeration lies between Geneva, Lyon, and the South of France, giving it a central geographical location.

The industrial metropolitan region in the heart of the Alps had to tackle its locational disadvantages, as it suffered from high air pollution as it is in a valley, the so-called basin effect. This led to the decision to build a tramway, which was inaugurated in 1987 and subsequently extended in several steps to today’s 35 kilometres of tramway. Since its opening, the Grenoble tramway has been fully accessible and holds the record as the world’s first completely low-floor tramway.

In addition to these efforts to reduce air pollution, an extensive cycling strategy has been the basis for the current SUMP since the 1990s. The sustainable urban mobility plan of the Grenoble-Alpes Metropolitan Area, which is now in its second iteration, aims to enhance the use of public transport and active mobility, while tackling road congestion and the limited use of rail services.

One of the reasons for the Jury to select Grenoble-Alpes Metropolitan Area’s SUMP as the winner of the 9th SUMP Award was a large list of concrete actions that will include around €2.2 billion of investments, which aim to tackle seven core targets by 2030. These include, inter alia, the complete shift away from fossil fuels and giving priority to environmentally friendly solutions for daily commuters, as well as favouring active mobility. According to  SMMAG, these aims will allow the metropolitan region to reach their 2030 target of reducing nitrogen oxide pollution by 75%, based on 2015 levels.

Besides the target to significantly reduce air pollution, accessibility is another essential topic. Since the introduction of the low-floor tramway, the Grenoble-Alpes Metropolitan Area has continued to up its standards in terms of accessibility, thanks to investments into the infrastructure, such as audio- and visual announcements of service information at public transport stops, as well as elevated platforms – just to name a few.

The first results of the second SUMP can already be observed, as SMMAG has simplified the multimodal ticketing structure and tariffs. Additionally, the topic of intermodality is and will remain essential for SMMAG and the Grenoble-Alpes Area. Thanks to cooperation between various mobility providers, a ‘Pass Mobilité’ (mobility pass) was created. It will allow users to combine the use of different modes of (public-) transport and mobility services in several networks, as well as car-sharing or -pooling. Based on this project, a multimodal tariff will be set up by 2030 to ensure fair prices for subscribers and discounts for families, young and senior citizens, as well as people with reduced mobility. Currently, multimodal purchasing solutions are discussed within the scope of the wider Grenoble-Alpes Area. This would allow trip planning and booking with a single payment for a trip that includes several modes of transport.

By altering the modal split and increasing the the proportion of trips on bicycles by 33% between 2009 and 2016, Grenoble reduced pollution levels between 2007 and 2018, both for large particles (-41%) and fine particles (-60%). Based on these successes, the second SUMP was approved in 2019, which includes long-term plans until the end of this decade.

One of the main challenges of the Grenoble-Alpes Metropolitan Area is the limited amount of available land, due to the surrounding mountainous territories, which hampers the expansion potential of the metropolitan area. The challenge of being one of the most populous metropolitan areas in South-East of France is also an opportunity, as the region will attract local talent. These large-scale investments in the framework of a long-term SUMP will also increase the attractiveness of Grenoble and the surrounding region.

Other metropolitan regions can learn from SMMAG’s SUMP for the Grenoble-Alpes Area that aims for an ambitious shift from the use of combustion engine powered vehicles to zero-emission vehicles in inner cities, as this can lead to substantially better air quality, thanks to strict measures such as the low emission zone.

Additionally, SMMAG’s plan is a great example of how to deal with gender topics. The Transport Agency has allowed the drivers of night buses to follow requests from passengers to be dropped off in between two stops. This measure, which is allowed every day after 10PM, reduces the commute home for users who consider themselves in danger of harassment.