Getting people on-board for sustainable mobility planning in Karlskrona 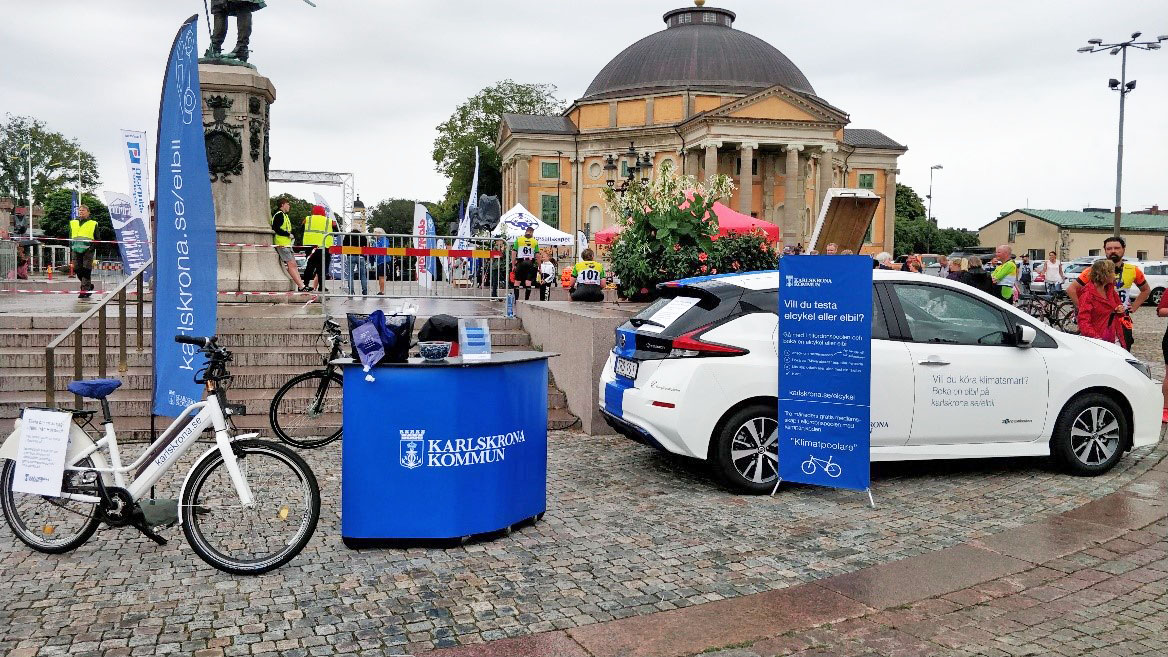 During the 2019 edition of the yearly summer campaign for sustainable mobility. Karlskrona municipality tested out a new method of involving its communities.

While engaged in face-to-face campaigning during the biggest summer events in the city, Karlskrona also tried to engage residents in the dialogue about sustainable mobility and their mobility habits. The method itself involved presenting maps of the city and allowing people to mark locations with unsatisfying mobility options or infrastructure, mostly regarding cycling infrastructure as the effort was part of the municipal cycling strategy. This was done both in order to inventory the infrastructure and to start a conversation about sustainable mobility, hopefully prompting the city residents to also consider their own habits and attitudes. On top of this, a survey was also conducted, covering the same topics. The survey complemented other actions while producing more quantifiable data. In order to attract respondents, the survey was paired with a competition where people had the chance to win an airbag helmet. The two complementing aspects of the method – the dialogue and the survey - were thought of as a way of both reaching already interested people and people who needed a little more motivation (with the prize) while simultaneously providing both qualitative and quantitative data on the mobility situation in Karlskrona.

This case study was created as a part of the cities.multimodal project

The method was developed as a part of the 2019 summer campaign, which was part of Karlskrona's mobility management efforts within the cities.multimodal project. After developing the summer campaign and trialling it for a short period, it was noticed that an aspect was missing. The campaign originally did not feel as sharp and engaging as it could be and it consisted more of talking to residents rather than with them. Because of this, the citizen involvement method was developed. The campaign, and therefore also the method, was developed through a collaboration between the logistics department and the project department at the municipality. The planning process only spanned over a few weeks as the method did not require large amounts of planning and was more of a spontaneous response to a need that arose. The need was to increase the involvement of city residents. Therefore, the purpose of the method was to gain a new perspective, collect opinions and identify what motivates the people in Karlskrona to travel the way they do. The method also encompassed collecting opinions on car and bike sharing as well as cycling infrastructure. All this information is going to be used for improving and streamlining the work of the municipality, to focus on what the communities identify as necessary for succeeding in active mobility.

The method was implemented during several events taking place from June to August of 2019. The budget for the events themselves came from municipal funds, specifically from the two collaborating departments, but the project planner was funded through the cities.multimodal project. In addition to the project planner, two summer interns also implemented the method. Together they planned and conducted the survey, organised a prize (airbag helmet) and giveaways, produced a map and materials for the dialogue as well as booked the tent and locations for the events. Also municipal representatives were present to help conduct conversations with individuals and communities. The target audience of the dialogues were the people of Karlskrona, both the ones already engaged in active mobility and the ones who are yet to try it. The communities were mostly reached via face-to-face communication during the biggest events of the year in the city, but also through sponsored facebook posts.

The outcomes of the method were 166 survey responses as well as a transcript of conversations with residents who stopped to make their suggestions. This information was in turn summarised into a report which was used to enlighten local politicians about the attitudes and ideas of their constituents. The report will also be used for future campaigns and work relating to the cycling strategy. There was some media coverage for the summer campaign, on the radio for example, but nothing specifically for the individual citizen involvement method.

The dialogue with the communities was to ensure that the work of the municipality is rooted in the opinions of the people. Therefore, the method was mostly for the benefit of the municipality. However, the participants were given some feedback afterward through social media posts, e.g. during the announcement of the winners in the survey lottery. Furthermore, in future work, which will be based on the results of this method, the public will be continuously informed of what is being done within the area.

The method was successful as it provided a vital connection with the residents that was previously missing. People seemed to enjoy being asked what they think and being listened to. There was a mix of people participating. Younger and older, men and women as well as ones that are more skeptical and already interested stakeholders and community members. It might be hard for larger cities to carry out something like this, as it would require a lot more work to cover the larger geographical area and a larger population, but it is a good way to get in touch with people who would not otherwise voice their opinion.

Here are some lessons that have been learned during this method:

This case study was created as a part of the cities.multimodal project and based on a report by: