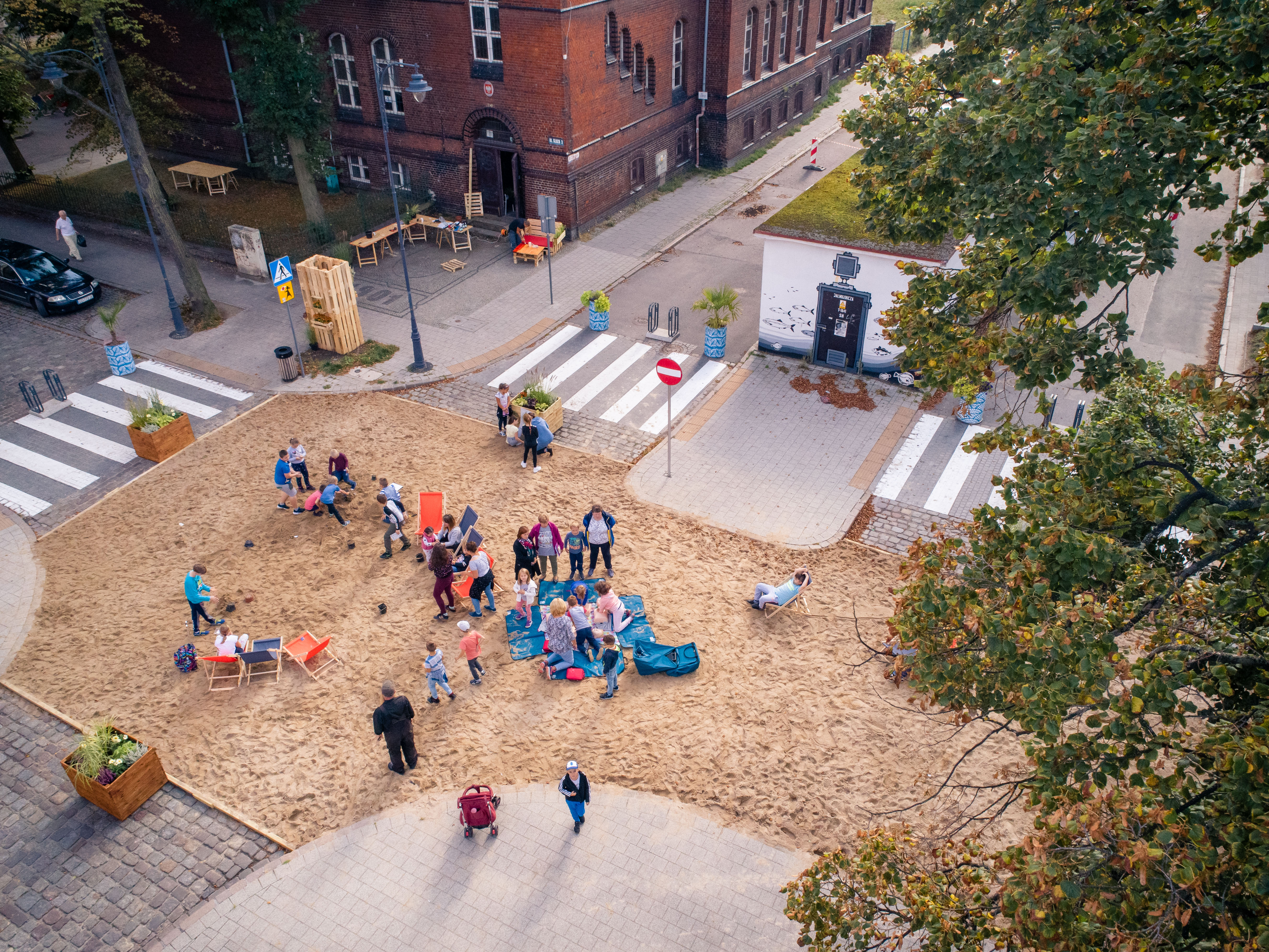 The City of Gdansk wanted to try this as an innovative method of promoting multimodal travel behavior in the city streets. The campaign was implemented during a two-week time period from 09 to 22 of September 2019 and was incorporated into European Mobility Week activities.

The campaign was coordinated by the Active Mobility Unit which is a unit in the Municipal Facilities Management Department within the City Hall of Gdansk. The Active Mobility Unit received help from the City of Gdansk’s Roads and Greenery Management authority. The preparations for the campaign lasted 3 months. Most of the time was devoted to involving local partners and agreeing with the cooperation approach. Another time-consuming task was to involve departments responsible for managing roads, safety and traffic organisation around the city.

The main objective was to show residents that the street can become a nice meeting place where residents can spend time together, do some sports, play games, rest and visit various consultation points. The consultation points offered medical and social advice as well as guidance on waste segregation. Residents could, for example, talk to healthcare professionals and learn about the importance of recycling.

Another objective was to increase people's involvement in active mobility and offer residents the opportunity to test their readiness for switching from cars to other means of transport to reach work, school, and other places. The readiness testing was achieved by surveying people who attended the campaign about their mobility behaviour and whether they would be willing to change their mobility habits. The Living Street campaign was visited by community members coming from various demographic groups. However, the most eager visitors were families, teenagers, and seniors.

The main target group was the neighborhood residents, with special attention to children and seniors who could profit the most from the campaign. To involve the target group, it was communicated that the streets can be used equally for all residents and that the streets are a place where the neighborhood can meet, talk, play and spend time in an active way. The target group was reached by means of direct meetings with partners, posters, radio commercials, direct written information put on the car windscreens as well as by means of informing through e-register at school, Facebook posts, and press articles. Announcements were also made in connection to Holy Mass in one local church after the official mass the priest read out an announcement about the campaign taking place. Many people living near the campaign area do not have smartphones and internet access, which made analogue and direct communication important to be able to reach the target group.

The first step of the planning phase was to set the location, discuss the characteristics of the location, and the feasibility of the campaign with the Roads and Greenery Management as well as with the public transport operator. In practice the following tasks had to be taken care of prior to the campaign:

After the Living Street campaign was finished, the results of the campaign were collected through paper and online surveys. The survey consisted of questions on whether the residents enjoyed the campaign, their use of mobility modes, and how they were affected by the campaign. The clear majority of the respondents gave the campaign a good grade and were in favour of the campaign being organised again.

Around 40% of the respondents answered that the campaign changed their perception of their daily mobility behavior. After finishing the campaign, a press release was published about the campaign ending on the City Hall’s webpage.

Media coverage was wide and spread around the country, however the outcome did not completely fulfil expectations. It is assumed that the election season which was simultaneously on-going influenced the media coverage of the campaign and there were also differences in how the campaign was portrayed between different broadcasting networks. Based on the experiences of the campaign, recommendations are to prepare a communication strategy. It is also important to strategically plan the communication activities ahead so that the right message reaches the target group you would like to involve. It is beneficial to employ external communication experts to support successful communication. The involvement of local stakeholders and the implementation of innovative solution contributed predominantly to the success of the campaign.

This case study was created as a part of the cities.multimodal project and based on a report by: Anna Klinkosz Project Manager Active Mobility Unit, City of Gdansk.