Bilbao, a city in transformation – finalist of the 9th SUMP Award 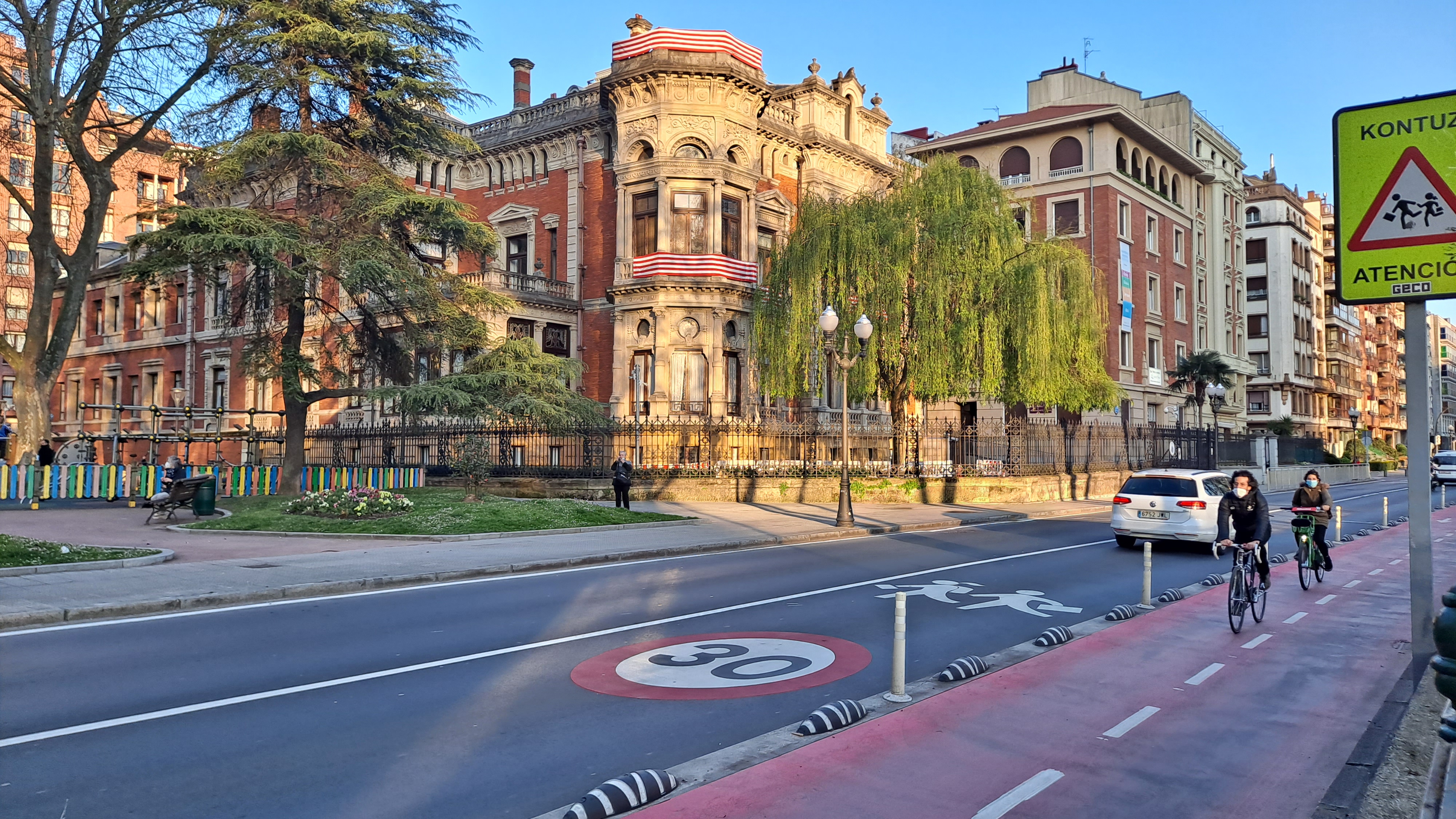 Bilbao was one of the finalists of the 9th Award for Sustainable Urban Mobility Planning (SUMP Award), which focused on the theme of ‘zero emission mobility for all’. Amongst the three finalists, which also included the Greater Grenoble Area Mobility Authority (SMMAG) for Grenoble-Alpes’ SUMP (FR) and Belgrade (SRB), Bilbao was selected as a result of its clear focus on road safety and the prioritisation of non-motorised mobility. One essential step towards the implementation of the local SUMP was the decision to reduce the speed limit to 30 km/h in the entire city of Bilbao. The city on the northern coast of Spain is currently on the second version of its SUMP. Since the first ‘Mobility Master Plan' from 2003, which was updated in 2011, a Sustainable Urban Mobility Plan has paved the way for significant developments until 2030 and beyond.

As one of the largest cities in Spain, the 300,000 inhabitants of Bilbao have two metro lines, which run parallel along the riverbanks of the Bilbao estuary. These two lines connect the city with the metropolitan area, which is home to about one million inhabitants. The largest city of the Basque country is located in a hilly area about ten kilometres from the Atlantic Ocean.

Thanks to its rich history and mild climate, Bilbao is a popular tourist destination, especially due to the world-famous Guggenheim museum, designed by renowned architect Frank Gehry. Besides being a popular modern art venue, the historic city centre is also a magnet for tourists. Bilbao remains an important commercial harbour and therefore a national hub for freight transport. In recent decades, a transformation has taken place with the city changing from an industrial city towards a cosmopolitan centre that has recovered neglected areas in and around the metropolitan area.

This and other factors have led to an increase in the number of internal trips per year, which rose from 750,000 in 2002 to 850,000 in 2018. Taking a closer look at these numbers, one can observe that the modal split is already good, as pedestrian trips make up 62% of the modal share. This is a direct result of the development of several major pedestrian areas, according to Bilbao’s city officials.

Bilbao plans to reduce its greenhouse gas emissions by 50% until 2030, in accordance with EU targets. One of the pillars to achieve this is investment in infrastructure, including charging points for electric vehicles. Currently, there are 88 recharging points in 34 different locations. Besides these infrastructure measures, Bilbao has also invested in its fleet of electric and hybrid buses. Currently, 113 electric and 37 hybrid vehicles roam the streets of the northern Spanish city. In the upcoming years, Bilbao aims to renew 120 vehicles in its public transport fleet with the target of progressively electrifying its public vehicle fleet.

Besides the significant number of trips made on foot, active mobility is further encouraged by a bike-sharing scheme with 450 bikes, divided between 40 rental locations. Additional milestones of the SUMP 2030 include the city’s efforts to increase the overall safety of its citizens. Furthermore, safety will be increased by a stronger emphasis on gender equality.

In addition to an extensive metro system of nearly 50 kilometres, which is quite extensive for a city with 300,000 inhabitants, Bilbao also has a significant bus network. The Bilbobus service, unrelated to the eponymous hobbit, has 50 lines and more than 500 stops, which resulted in around 25 million journeys per year in pre-COVID-times. Additionally, Bilbobizi, the public bike sharing service registered 1.7 million users in 2019.

Since the city of Bilbao is built on hilly terrain, public lifts are an essential means of transport and a unique feature of the city. 24 million people are transported by public lift every year. Other tangible results related to infrastructure include the intermodal station that opened 2019, connecting long-distance bus lines with metro and train services. This will play a significant role in the future with the arrival of a high-speed train connection from Bilbao to the Spanish capital of Madrid and other cities in the vicinity, such as Vitoria-Gasteiz.

In addition to infrastructure investments, initiatives to strengthen electromobility are also foreseen within the current SUMP. Proposed initiatives include tax incentives for electric vehicles and investment in electric vehicles for municipal use. Efforts to decarbonise Bilbao are enhanced by the initiation of a legislative change to enshrine a gradual change from petrol-fuelled taxis towards zero-emission vehicles. These efforts will boost the number of electric vehicles from currently less than 1000 up to the target of 25,000 in 2030. This measure will also have significant impact on noise pollution levels, which will be reduced by 2 decibels with respect to the current noise map.

A significant challenge for Bilbao is the topography of the metropolitan area, as it stretches from the flat riverbanks of the estuary up to the surrounding hills. Nevertheless, the city is tackling this issue by highlighting the importance of vertical mobility. This challenge is eased by incorporating mechanical elements, such as lifts, into the pedestrian network where the slope is excessive. According to official sources, eight new lifts have been put into service since the approval of the SUMP, increasing the total number to 46 solutions that foster vertical mobility.

At the same time, the geographical location can also be an opportunity, as it provides a flat surface for an increased cycling network. As previously mentioned, the extensive bike sharing scheme helps to reduce congestion and fosters active mobility across the city.

One of the main transferable examples from Bilbao's SUMP is the decision to limit the speed of vehicles to 30 km/h in the entire city. Whereas the overall effect will be assessed after the measure has been implemented for a longer period, examples from other cities, such as the previous year’s SUMP Award winner Brussels, show that the overall average speed drops immediately after the introduction of the measure. The first results will be available once the traffic data for an entire year is evaluated in September 2021.