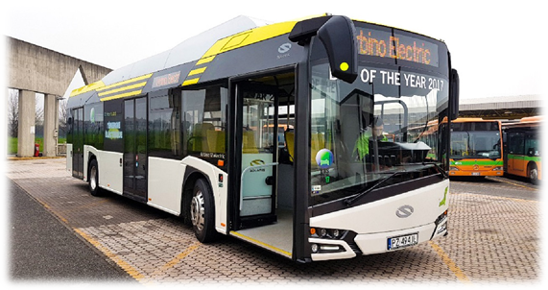 The Transnational Webinar titled 'Public transport as a driver of the energy transition in the transport sector' within the Interreg EfficienCE project took place during the European Week of Regions and Cities event on 12 October 2021. The presenters answered questions from different perspectives of how public transport can actively contribute to increasing the share of renewable energy in electric public transport operations.

The first speaker from PKT (trolleybus operator, Gdynia) talked about the results of the test implemented within the Interreg EfficienCE project: the usage of braking energy from trolleybuses and the trolleybus grid for better energy management.

The second presenter from Wiener Linien talked about the results of the installation and performance evaluation of a foil-based photovoltaic system on the roof of a Metro Station in Vienna.

A member from the Municipality of Bergamo talked about the importance of sustainable mobility nowadays and in the future in the City of Bergamo, Italy.

The last speaker from Deutsche Energie-Agentur (dena) introduced the guide for municipalities on the procurement of vehicles with alternative drives in public transport.

During the webinar, participants had the opportunity to have a look at the first mobile charging station for electric cars powered by a trolleybus network (by using recovered energy from the braking of trolleybuses). The system was built in Gdynia, Poland. An energy storage inverter has been designed and constructed by municipal trolleybus operator PKT within the EfficienCE project, which is a device for processing excess braking energy and traction power, while the mobile charging station for electric cars was built as part of the project CAR (Creating Automotive Renewal – INTERREG South Baltic) by the city of Gdynia.

The original article was published on the website of the EfficienCE project on 25 October 2021.

Region:
Europe-wide
Topic:
Clean and energy-efficient vehicles
Link:
Webinar held on Public transport as a driver of the energy transition in the transport sector