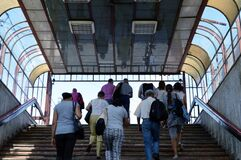 March 2021 saw the launch of a national campaign to promote the use of alternative transport to reduce pollution and carbon emissions. Under the slogan, “STOP! Today the car is standing still!” the Green Friday campaign encourages people to leave the car and instead to use the public transport, bike or walk to work on Fridays.

The "Green Friday" campaign has been launched by the Ministry of Environment, Waters and Forests (MMAP). It aims that by the end of this year, at least one in four employees will come to work on foot, bicycle or public transport on the last working day of the week.

The Minister for Environment, Barna Tánczos, stated: “We are faced with polluting mobility in a transport system that is congested. This is why the Ministry of Environment, Waters and Forests wants to establish Green Friday in Romania, as a voluntary initiative in which we invite people in Romania to give up on Friday’s the ‘traditional’ travel by personal car and to choose less polluting means, perhaps even zero carbon footprint, non-polluting means of transport. Green Friday is an invitation to a different kind of behaviour, an initiative that seeks to change mindsets.”

Employees of the Ministry and other public institutions should be first to set an example. Kicking-off the campaign, Prime Minister Florin Cîțu and various ministers went to work on foot, by public transport or an electric vehicle.  “I do this very often, but I'm glad you don't know every time I do this, otherwise I would attract too much attention”, stated the Prime Minister to waiting reporters when arriving on foot at the gate of his office in the capital’s Victoria Palace.

It is hoped others will follow the example. Tánczos added: “We will work together with private companies, with NGOs, so that the message reaches everyon in Romania and is multiplied not only by public institutions, but also by private companies. We also want to establish a new culture, a new way of thinking towards zero mobility, with zero emissions or with the lowest possible emissions.” The Ministry is exploring what incentives can be provided to reward those that commute using alternative transport. Among others, the Ministry is to start talks with city halls of Romanian cities to establish the free use of public transport on Fridays.

Romanian cities are particularly affected by congestion and air pollution caused by traffic. Therefore, it is not surprising it is hoped cities will also join the initiative and are indeed doing so. A week after the launch of the Green Friday campaign, the city of Cluj-Napoca announced its support for the campaign. Cluj-Napoca mayor Emil Boc said the city is in talks with the local public transport company to offer free public transport services once per week. In addition, the objectives of the campaign align with the "green" direction for development of the city. Boc encouraged people in Cluj-Napoca to walk to work at least once a week or use public transport or another alternative to the car. In a statement Boc also highlighted that tthe city is taking measures to facilitate and improve alternative transport. Boc stated: “Modernisation of public transport remains a key priority and we continue to implement projects that develop the urban network of alternative mobility - creating new bike lanes to interconnect the city's neighbourhoods, arranging lanes dedicated to public transport on several sections , the issuance of taxi permits for electric cars, as well as the continued purchase of electric buses, trams and trolleybuses.”

Image source: © douglasmack / shutterstock - no permission to re-use image(s) without a separate license from Shutterstock.