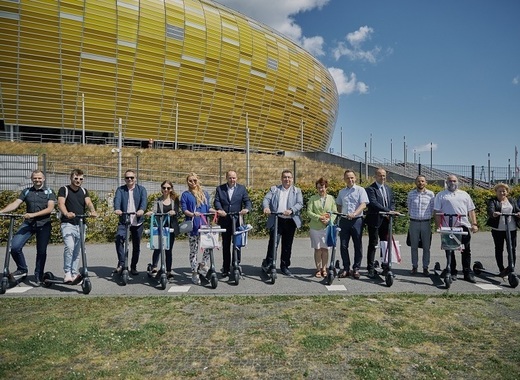 As part of an awareness raising campaign, officials of 10 northern Polish cities have been presented with e-scooters to trial.

'Mobile Office – Active Official' is the name of the campaign, which is being implemented by the Polish Union of Active Mobility (PUMA), to promote pilot solutions for multimodal trips. In late July 2020, employees of 10 northern Polish cities received e-scooters so that they were able to test these as a means of moving around their cities and even of commuting to work.

The idea behind the campaign is to find innovative means of transport that help to bridge the 'last mile gap', e.g. travelling from a public transport stop to a person's final destination. To facilitate their use for the 'last mile' of a journey mainly undertaken using public transport, the e-scooters are foldable and thus easy to carry on board buses, trams and trains. The “Mobile Office – Active Officials” campaign wants to provoke the interest of public employees in e-scooters and to encourage them to make a decision to use these based on their practical experience, if the purchase of an e-scooter is an option for their daily mobility routines.

Rafał Glazik, secretary-general of the PUMA, said “Of course, we are aware that one electric scooter in the case of medium and large offices, which have several branches in the city, will not meet the demand for a cheap, convenient and ecological means of transport”. As he expands further, the provision of the e-scooters aims at providing a solution for the last mile of a journey, which is often the biggest challenge to avoiding car use and to combining the use of different means of transport instead.

The campaign “Mobile Office – Active Official” is part of the cities.multimodal project funded within the Interreg Baltic Sea Programme.