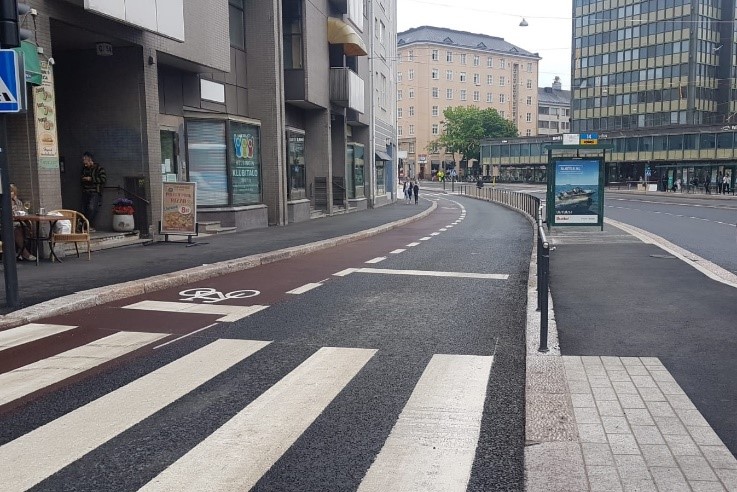 As part of its work in CIVITAS Handshake, the City of Helsinki recently conducted a Bikenomics analysis of a major cycling project in the city.

To better understand the economics of such investments, the Finnish Capital investigated the return of investment from cycling path constructions. The evaluation focused on recent work to adapt Hämeentie, one of the major streets in Helsinki's city centre, for more cycling. In total, the Northern European city has built 1,300 kilometres of cycle paths and the busiest route in the city currently racks up around 10,000 rides per day. A similar cost-benefit analysis has not been performed in Finland before.

In the past, the WHO HEAT tool has been used to support project evaluation, but it does not take into account the costs and benefits as extensively as Bikenomics. Following the positive experiences of using it for Hämeentie, the tool will be used in the development of project evaluation.

The benefits of the Hämeentie reform are significant. According to the analysis, the one-way cycle paths built on the street are a profitable investment for the city. For every euro invested, bike paths generate 3.6 euros for the city.

The biggest benefit links to health. Cycling reduces the health risks and costs of immobility. Low mobility people in particular will benefit from the increase in daily physical activity.

Another benefit of the Hämeentie cycle paths is the reduction in travel time. Cycling, public transport and walking reduce congestion by moving people from A to B more space efficiently. The analysis of Hämeentie supports previous research results on the profitability of these modes of transport in a limited urban space. Costs and benefits were considered holistically.

During the renovation of Hämeentie, the tram rails, public transport stop arrangements and street municipal technology were also renewed. The cost-benefit analysis took into account, among other things, the investment costs and maintenance costs of street redesigns for bicycle traffic, traffic volumes by mode before and after the renovation, shifts from one mode to another, and speeds and travel times.

The benefits and costs were broken down into changes in travel time, externalities such as congestion and health effects, and economic effects such as investment and maintenance costs. Cost data at the time of design were used in the evaluation.

If the costs of repairing underground municipal infrastructure incurred in connection with the street renovation are taken into account, the cost-benefit ratio of the project is 1.8. A project is profitable if the number is more than one.

The cost-benefit analysis was carried out as part of Helsinki's work in Handshake.

A broader study published earlier this year looked at 106 cities with cycling infrastructure installations during the COVID-19 pandemic. They saw a cycling increase of 11 to 48% on average which was calculated to an estimated health benefit to the residents of these cities between EUR 0.8 billion and 5.7 billion.