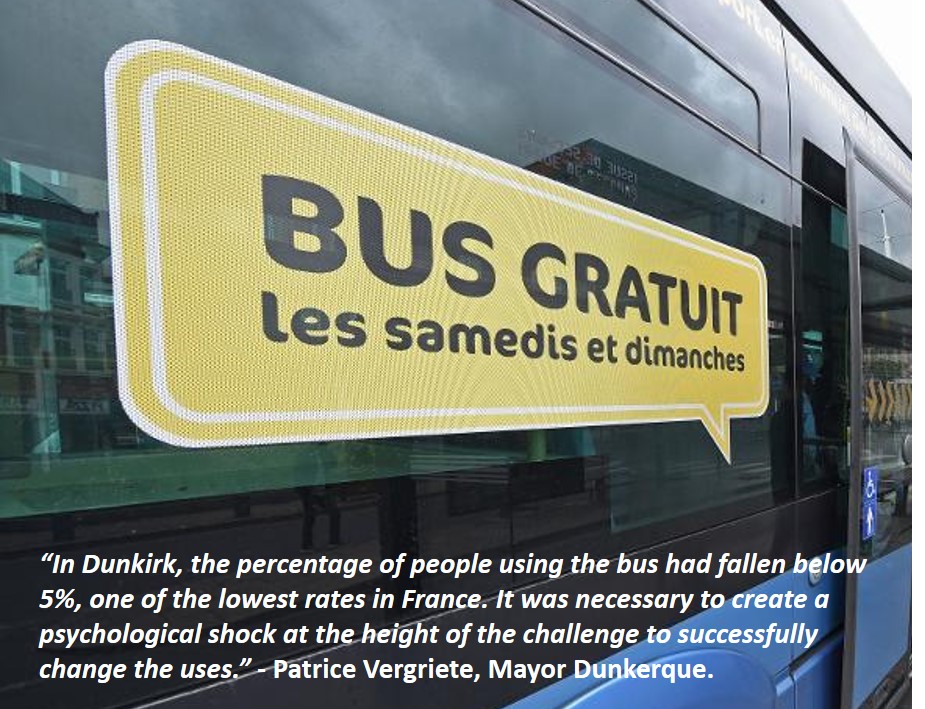 Following the introduction of free public transport and improved services in September 2018, passenger numbers have increased dramatically in the French Urban Community of Dunkirk. Moreover, it has made a significant contribution to reducing private car use, a recent study concludes.

In September 2018, the Urban Community of Dunkirk launched a new transport network which had been completely redesigned and improved with the added benefit of being free for both residents and visitors. A new study on the experience finds that bus use has increased by 65% during the week and by 125% during the weekend eight months after introduction. The study considered data from automatic counting systems installed in public buses and from a survey conducted among 2,000 public transport users in central areas of the Urban Community.

From the users that indicated they increased their use of public transport, almost 50% stated that they used it for journeys previously travelled by car. Furthermore, 10% no longer have a passenger car or have decided not to buy a new or a second car. It mainly concerns people who live in the heart of the community which is well-served by the bus network and where many trips can also be made on foot and bicycle.

In contrast, the introduction of free and upgraded public transport service had little impact on cycling. Cycling is mainly considered a summertime leisure activity and is little developed as a transport mode within the Dunkerque area. According to a travel survey conducted in 2015, only two percent of trips were made on a bicycle and even for short distances trips the share of cycling remains low.

It is expected that major improvements to the cycling network and facilities that are being implemented this year, will have a more significant and positive impact on cycling in the Dunkerque area.

Improving public transport and making it free from charge was an important election promise of the 2014 municipal election campaign of Patrice Vergriete, the current mayor of Dunkerque. To deliver on that promise, an ambitious project “DK'Plus de mobilité” was launched. It aims to modernise the public transport network and redevelop the agglomeration, providing simplified travel, better shared public spaces and more comfort and green spaces in the city.

Amongst others, the bus network was reconfigured, connecting Dunkirk to a cluster of neighbouring towns, with five express lines running every ten minutes throughout the day, and a dozen other lines serving less dense areas. Some €65 million has been invested into the redevelopment of seven larger areas and corridors and more than a hundred small interventions in the agglomeration. The extra cost of introducing free public transport is around €13.5 million per year. Before the network was revamped, buses were often almost empty meaning that ticket sales contributed only a small amount – about 10% – of the system’s funding. The remaining costs were already being publicly subsidised. Although, making public transport free came down to a “political choice”, so far the impact on the budget has been limited.

Albeit impressive growth in public transport use in the first years is too early to make a definitive judgment about the merits of free public transport in Dunkirk.  People want to experience the new offer. After the novelty wears off it remains to be seen if travel habits change permanently and modal shift and other benefits associated with free public transport will occur in the longer term. At the same time, Dunkirk's public transport system is far from saturated yet and can continue to accommodate growth. The pressure on the budget from a need to make massive new investments to keep up with the growth is thus limited, at least for the time being. For now, the initial impact on mobility is positive and further developments in Dunkirk interesting to follow.