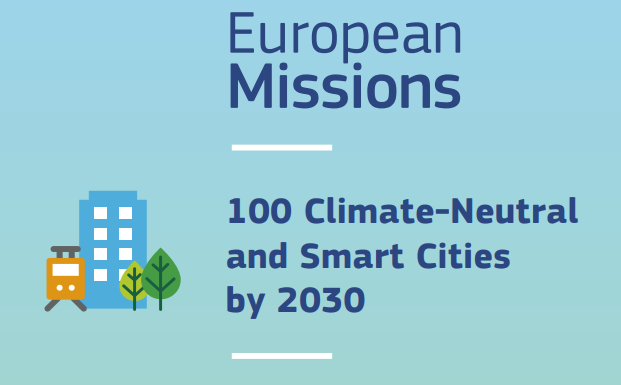 On 29 September 2021, the European Commission launched five new EU missions, which represent a novel and innovative approach to working together and improving the lives of people in Europe and beyond. The EU missions aim to tackle significant challenges in health, climate and the environment, seeking to deliver solutions to these global challenges by 2030.

The EU missions have now entered into their full implementation phases. As such, the first Horizon Europe work programme for 2021-22, which was published on 16 June 2021, includes a set of actions that lay the foundations for their implementation.

One of these five missions is the Climate-Neutral and Smart Cities mission.

While cities take up just 4% of the EU’s land area, they are home to 75% of people in the EU. Worldwide, cities account for more than 65% of energy consumption and for more than 70% of CO2 emissions. Therefore, cities have the potential – and their Mayors often have the ambition – to play a pivotal role in delivering on the European Green Deal, helping the EU reduce emissions by 55% by 2030 and become climate neutral by 2050.

The Cities Mission is centred around two main objectives:

The Cities Mission takes a cross-sectoral and demand-led approach, creating synergies between existing initiatives and basing its activities on the actual needs of cities. A central feature of the Mission will be Climate City Contracts which participating cities will sign and implement.

Although not legally binding, these contracts will constitute a clear and highly visible political commitment not just to the Commission and the national and regional authorities, but also to their citizens. They will set out plans for the city to achieve climate neutrality by 2030 and they will include an investment plan.

Climate City Contracts will be co-created with local stakeholders and citizens, with the help of a Mission Platform, to be set up by NetZeroCities – a four year project designed to support the Cities Mission as part of Horizon Europe.

The Mission Platform will provide the necessary technical, regulatory and financial assistance to cities. In addition, Horizon Europe will invest around 350 million EUR in research and innovation actions linked to the Mission (e.g. in mobility, energy, urban planning) in the period 2021-2023. Some calls for proposals are already open in the Commission’s Funding and Tenders Portal, with a full first work programme to be published by the end of the year.

For further information on the Climate-neutral and Smart Cities mission and the NetZeroCities project, please visit the following websites: