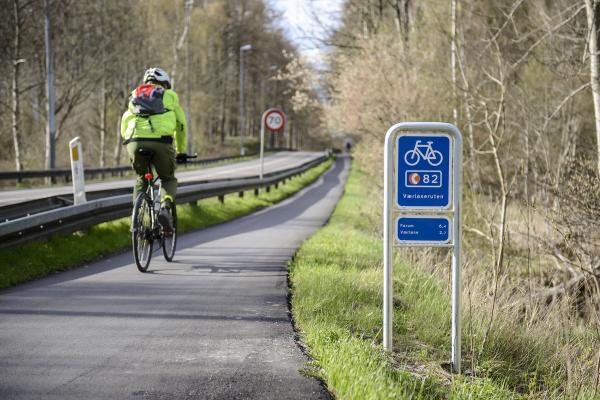 Spanning the Capital Region of Denmark are the 'Cycle Superhighways' – a network of bicycle commuter routes that cross municipal borders, totalling 176 km. By 2045, it is exepcted that these routes will reach 746 km.

The CIVITAS Handshake project is on a mission to make cities cycle-friendly, by supporting the transfer and uptake of cycling measures developed by three pioneering 'Cycling Capitals' - Copenhagen (Denmark), Amsterdam (the Netherlands) and Munich (Germany) - to ten further European cities.

Copenhagen, one of the pioneering cycling capitals, is involved in the Cycle Superhighway collaboration, which includes thirty municipalities. With an average trip length of 11 km one way (and some users of the network commuting distances longer than 20 km), a smooth and pleasant ride is extremely important.

Recently, the collaboration gathered knowledge directly from users via a participative analysis, in order to improve the bicycling experience on the Cycle Superhighway. Together with the strategic innovation agency 'Is It a Bird', study organisers asked commuters what constitutes an attractive bicycling experience on cycle routes. The main question in the analysis was: 'Which factors define an attractive user experience, and what measures can help to improve upon this experience?'.

The method of digital ethnography was used in order to connect with participants and gather data. Participants kept a digital 'bike diary' through an app on their phone. They used text, photos and short videos to document their daily trips. Twenty-six users from Copenhagen participated in the analysis, all of which were 19-63 years old and use their bike on their daily commute at least three times a week.

Based on the experiences and reflections of the participants, 'Is It a Bird' were able to define three main criteria for the attractive bicycling experience: good flow, prioritisation and route predictability.

The routes that were considered most attractive were those with the least stops, as they promoted good flow of bicycle traffic. According to participants, bicycle crossings must be designed so that they are easy to orient and so that cyclists know vehicle drivers can see them.

Cyclists have needs that differ from those belonging to other modes of transportation. The attractive route, is therefore one that takes their needs as seriously as those of other commuters. According to participants, if vehicles and cyclists share the road, their lanes need to be as separated as possible. If there is no physical barrier, collective traffic tends to prioritise the needs of vehicle drivers. When traveling alongside heavy vehicles, participants felt that they did not have sufficient space and thus felt unsafe. The attractive cycling route should therefore be separated by a kerb and have as much distance from the vehicle lane as possible.

According to participants, a pleasing cycling route is also one which is free from pedestrian traffic. Pedestrians and cyclists have different speeds and needs, so the route does not appear attractive if it crosses shared spaces. The most problematic are those places where separated spaces suddenly change into shared ones.

Cyclists want to be sure that their favourite route is always accessible and that there is good signage, particularly when there are roadworks or closures. According to participants, cycle paths need to be maintained so they continue to be clean and safe - and good wayfinding can make a real difference.

In summary, the study brought many interesting insights for the future planning of the Cycle Superhighway. Many of the insights confirmed prior expectations, but data from the field is always extremely valuable. The City of Copenhagen, and the CIVITAS Handshake project, strongly encourage all cities to get out there, talk to users, and start making the cyclists experience more enjoyable!