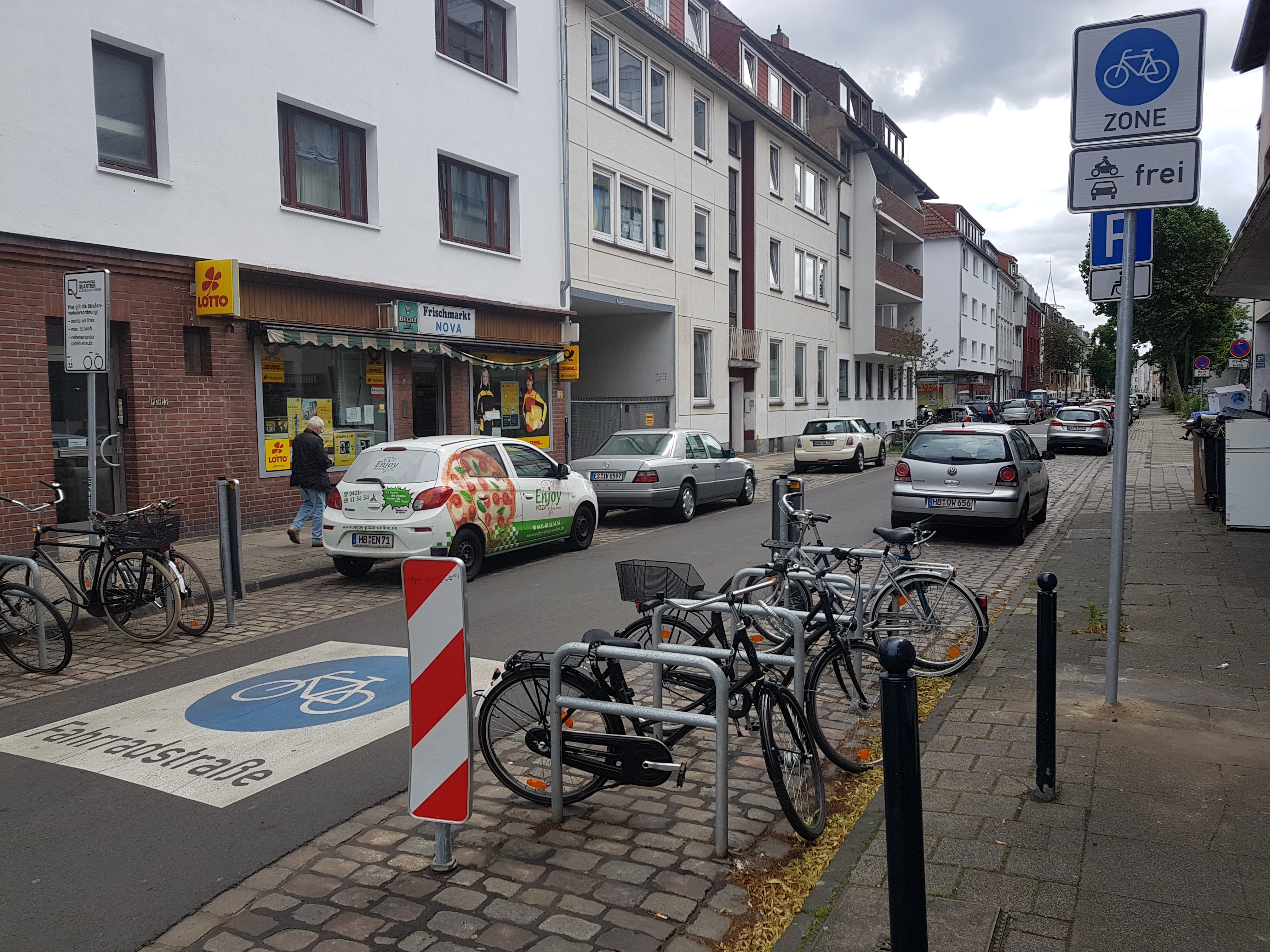 Bremen's Minister for Mobility Dr Maike Schaefer officially dedicated the first German bicycle zone on Tuesday 07 July 2020. This is the first time that the new signposting option of the amended road traffic regulations has been applied in Germany. "Four years ago, it was still a dream - now the completed bicycle model neighbourhood and also the formal designation as a bicycle zone have become reality. This makes us a pioneer nationwide. Bremen was the driving force behind the possibility of designating a bicycle zone", Minister Maike Schaefer commented.

The bicycle zone covers the “Alte Bremer Neustadt” and is one of the core elements of the model bicycle neighbourhood. It includes 12 streets and roughly 2.5 kilometres of road space in the Neustadt district of Bremen. The zone signage reduces the number of road signs needed from 86 for conventional cycle roads to a total of 22 in the cycle zone. In Bremen, a quarter of all journeys are made by bicycle. "As a bicycle city, Bremen not only has the highest proportion of bicycles but also the lowest nitrogen oxide levels of all major German cities over 500,000 inhabitants," Minister Maike Schaefer emphasised the advantages of promoting cycling in the Hanseatic city.

Burkhard Stork, Director of the German National Cyclists’ Association (ADFC), underscores the importance of cycling for federal politics: "Bremen clearly shows other cities and also the federal government the importance of the bicycle in avoiding diesel vehicle bans and reducing congestion. Bremen's bicycle model neighbourhood won the 2018 German Bicycle Award following the motto “from bicycle road to bicycle zone”. This provided the impetus for the corresponding change in the road traffic regulations". "While the proposed bicycle neighbourhood as a bicycle zone was originally criticised by the Federal Ministry of Transportation, Minister Andreas Scheuer has now introduced the bicycle zone as a traffic sign - a great success for the model neighbourhood in Bremen", said Minister Maike Schaefer.

The bicycle zone is part of the revised road traffic regulations to make Germany more bicycle-friendly. "The Federal Minister of Transportation has stated a goal of making Germany a bicycle-friendly country. In the bicycle zone, people on bicycles have priority. I congratulate Bremen for being the first to make use of this option," says the Federal Director of the ADFC. The "bicycle zone" traffic sign, which makes its national debut in Bremen, applies the rules of a bicycle street to an entire neighbourhood. A speed limit of 30 km/h applies and bicycle traffic has priority. Side-by-side cycling is also allowed. It took four years to realise the idea of the model bicycle neighbourhood: in 2016, the elected district council, the ADFC in Bremen and the Bremen University of Applied Sciences initiated the establishment of a model bicycle neighbourhood in the Alte Neustadt in Bremen. Bremen’s transport authority took up the initiative and successfully applied for funds from the National Climate Protection Initiative (NKI). The federal government supported the establishment of the bicycle model neighbourhood with €2.4 million of funds. Cobblestones were replaced with a smooth lane, corner bulges and bicycle stands provide a better overview, parking was provided, the surrounding streets were equipped with safe crossing options, bike-sharing and cargo bike rental, an air pump and charging stations for e-bikes were created and the university established a bicycle repair café.

The measures were accompanied by extensive public engagement. "The bicycle model neighbourhood in Bremen provides an impetus for many cities in Germany and Europe to establish bicycle-friendly neighbourhoods. Bremen also already has a second bicycle model quarter. More will follow", Bremen's Minister Maike Schaefer made clear.