We are sorry, this content is not available in your language.
Par News Editor / Mis à jour: 29 Aug 2014 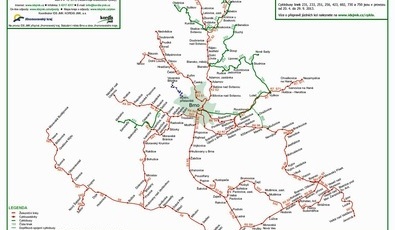 In April 2012 the South Moravian County and the Integrated Public Transport System of the South Moravian Region launched a new project to improve the attractiveness of the region by making rail and bus services compatabile with using a bicycle.

The main problem was the lack of ability to transport bicycles on some bus lines in the region, although, the railways had already been offering bicycle transport for some years. The objective of the project was to enable tourists to travel by bike combined with railway and/or bus in one of the most attractive regions of South Moravia.

The measures introduced were as follows:

As bicycle touring is one the most popular recreational sports in the Czech Republic, the new railway and bus line connections for bicycle transport have proved to be very popular. Good information is available for travellers: maps including the special bus lines, leaflets showing interesting tour possibilities in combination with bicycle/railway/bus. There has been general recognition that some bus lines on which the bicycle transportation was introduced, were running much fuller than before. For this reason, the Integrated Public Transport System of the South Moravian Region plans to extend the scheme for the 2013 summer season.

Support for the project was high not at least because of the long-standing cooperation of the responsible authorities and public transport companies. The project is also linked with the national strategy for the expansion of cycling 2005-2013, and in the future further measures will be implemented.

This case study was collected in co-operation with the EU-project STARTER - http://www.starter-project.eu/