We are sorry, this content is not available in your language.
Par News Editor / Mis à jour: 11 Mar 2016 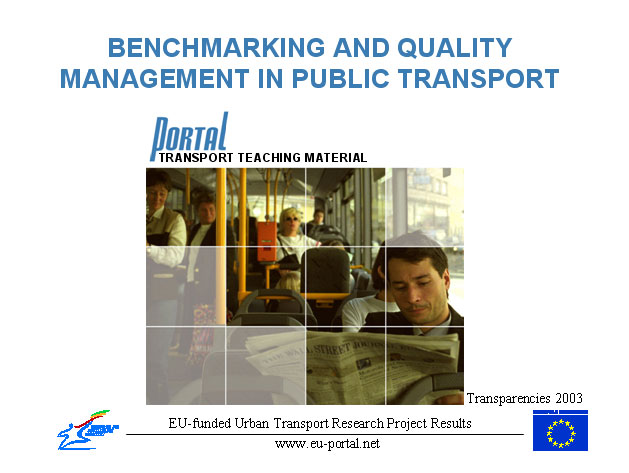 Both terms need to be clearly defined, because their present use is generally not appropriate: quality is a very well known word, but everyone puts their own interpretation on it. Benchmarking is often reduced merely to mean some sort of comparison.

This training material starts from the description of the seven management tools in attempt to understand the concept of quality and help to improve it. Some of them are already known, others are rather new, such as:

As it is a rather new concept in public service field, Benchmarking is more explained and described than the other tools. The topic ‘regulatory framework of public transport’ contains legal as well as organisational aspects. In recent years the frameworks have undergone significant changes due to the shift in political priorities proposed by EU legislation leading to a more deregulated public transport market enabling some form of controlled competition. Public transport is aiming to achieve economic efficiency, quality of service and transparency in operation and as well as in organisation.

Those goals can only be fulfilled if the relationship between authorities and operators is creative and mature. As in most affairs co-operation is the key to success, delays will cost more time, energy and money. The regulatory framework determines the way in which transport services are designed, planned and produced. Therefore transparent rules have to be established between the different agents of the systems. Especially the allocation of responsibilities and sharing of risks are critical matters, which have to be precisely defined.

Operators from different modes and authorities and from different jurisdictional levels have to co-exist both in time and in space. As well as transport authorities have to devise common strategic goals for the same urban area together with authorities from other areas if congestion relief and environmental protection is to be achieved.

Evidence exists in several cities around the world of transport policies, where the balance between private and public means of mobility can only be achieved through the application of co-ordinated ‘pull’ and ‘push’ measures. ‘Pull’ for entailing the improvement of the quality of public transport facilities and ‘push’ aiming to restrict the use of individual transport in certain areas and periods.

This training material, available to download below, provides background to the EU debate on regulatory issues for passenger transport.