The world’s first dynamic ‘bridge’ made of autonomous boats 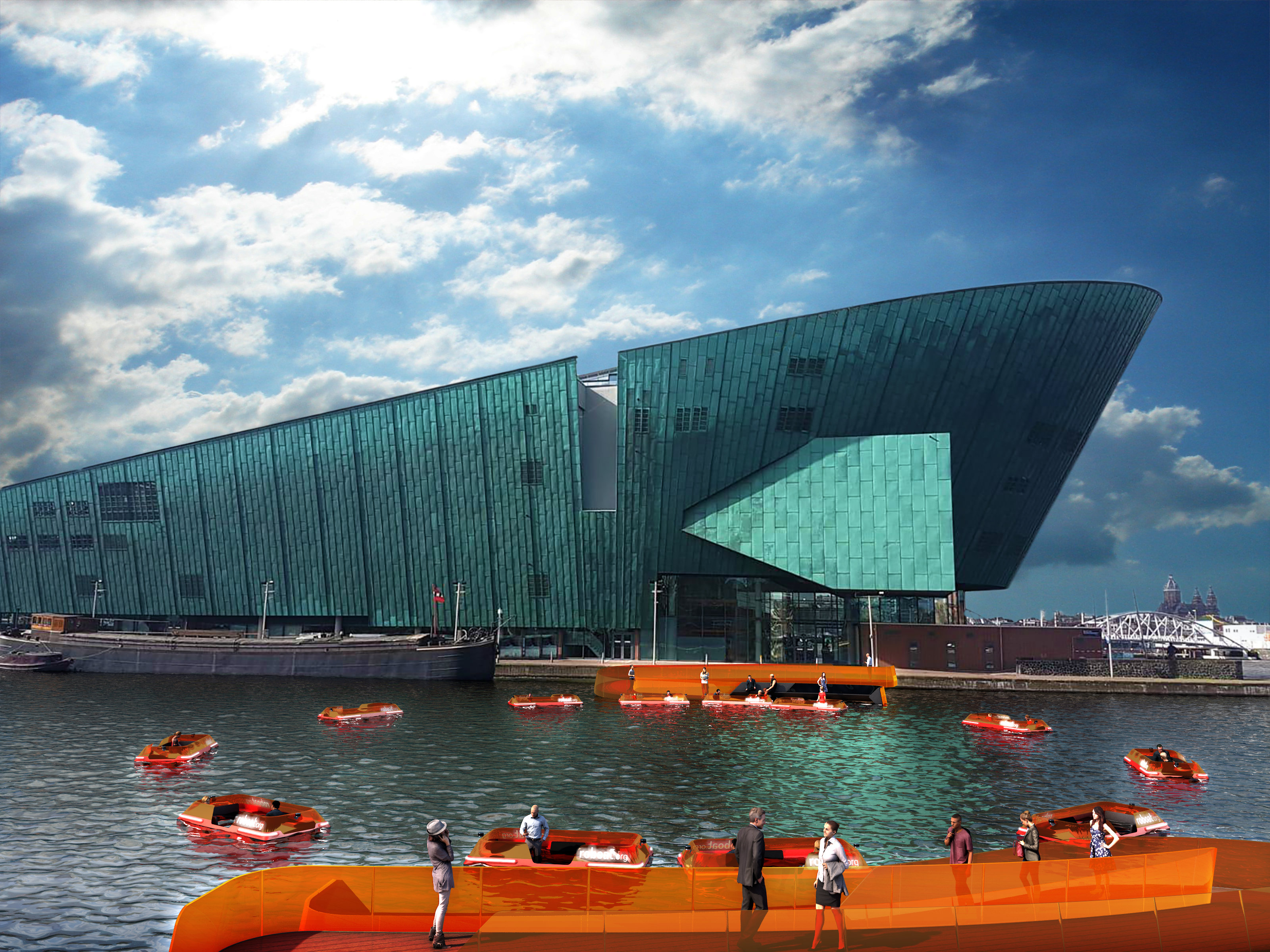 Could a fleet of autonomous boats bridge the waterway between Marineterrein Amsterdam and the Amsterdam City Center? Researchers at MIT, in collaboration with the Amsterdam Institute for Advanced Metropolitan Solutions (AMS Institute), have developed the concept of roundAround, the world’s first ‘bridge’ made of autonomous boats, or “Roboats”. It could offer a dynamic infrastructure solution to connect the two areas, seamlessly transporting hundreds of people per hour across the water.

A waterway separates the Amsterdam City Center from Marineterrein Amsterdam which is an area currently experiencing an increased rate of development. Without a bridge across the canal, it takes more than 10 minutes to walk the almost one kilometre from one side to the other; roundAround could reduce this travel time to less than two minutes.

“Bridging this 60-metre wide waterway truly challenges urban engineers, as it’s an important fixed mast route for bigger boats. This makes it challenging to design an accessible bridge across this canal. With Roboats as a dynamic infrastructure we can potentially connect the two areas and use roundAround as a living lab to develop on-site experience on how autonomous boats behave on the Amsterdam canals,” says Stephan van Dijk, Head of Research at AMS Institute.

How does it work?

The fundamental principle of roundAround is the use of autonomous boats. Equipped with cameras and Lidar technologies powered by artificial intelligence, roundAround’s multifunctional hulls are designed to transport people and goods across the canal while constantly evaluating the surrounding environment to maximise safety and efficiency. The Roboat units move in a continuous circle across the canal. Once at the quayside, these electric boats are guided by rail to a platform with inductive charging infrastructure where they can pick up and drop off passengers.

roundAround is one of the first proposed applications of Roboat, a five-year research project and collaboration between the Amsterdam Institute for Advanced Metropolitan Solutions and the Massachusetts Institute of Technology.

In developing the world's first fleet of autonomous floating vessels for the city of Amsterdam, it investigates the potential of self-driving technology to change cities and their waterways. “This project imagines a fleet of autonomous boats for the transportation of goods and people that can also cooperate to produce temporary floating infrastructure, such as on-demand bridges or stages that can be assembled or disassembled in a matter of hours,” says Carlo Ratti, professor of the practice of urban technologies in the MIT Department of Urban Studies and Planning (DUSP).

In addition to infrastructure and transport, Roboat will also deploy environmental sensing to monitor water quality and offer data for assessing and predicting issues related to public health, pollution, and the environment at a different location or for a different purpose.

The various applications of Roboat could help relieve pressure from the busy roads in the city centre. In addition, the new kind of on-demand infrastructure can be used as both a temporary and permanent solution with a variety of applications that will be tested throughout the project.

Carlo Ratti “The Roboat units of roundAround will autonomously respond to and learn from the dynamics of this Amsterdam waterway. As they operate, the system will become increasingly more intelligent and well-equipped to be implemented in other parts of the city and other cities worldwide.”