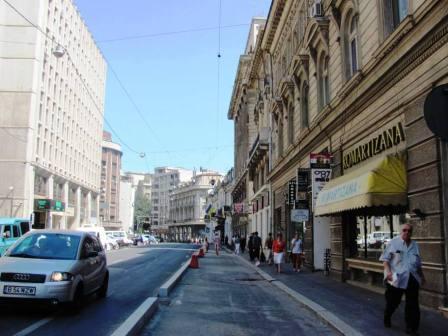 Car drivers will have one lane less on one of the most important traffic routes in Bucharest, Victoriei Avenue. With double-width sidewalks, Victoriei Avenue will regain its historical pedestrian vocation.
Bucharest local administration has just started the works that aim to transform Victoriei Avenue into a pedestrian street from a high-speed avenue for cars. The cars will have less lanes or have restricted access in certain areas which are to be transformed into pedestrian zones. The section of the avenue located adjacent to the historical centre is currently under construction. The sidewalks are being widened to the expense of one of the three existing car lanes, in order to facilitate promenade along the historical road and to provide easier links inside the most beautiful area of the city.

The Chief-Architect of Bucharest, Gheorghe Patrascu, stated that, due to major traffic changes in Bucharest that are to be carried out (Basarab Passage Way, Buzesti-Berzei axis), it will be possible for Victoriei Avenue to be completely free from car traffic. Car access could be completely restricted on the avenue at least during weekends and the entire Revolutiei Plaza should be a permanent pedestrian area.