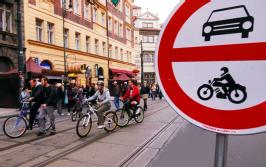 Prague’s historic Wenceslas Square was closed to car traffic for six hours on September 18th, and city officials say the experiment could be made permanent.
Plans to revitalise Prague's city centre have been bandied about for several years. City officials hoped their latest campaign to create a traffic-free Wenceslas Square would give it a jump-start by giving citizens and business owners a taste of what it would be like.

When I became mayor at the end of the last year, I heard from many sides that there had been talks for six years about a revitalisation of Wenceslas Square, and yet nothing happened. That sort of irritated me, Prague 1 Mayor Oldich Lomecký said during a speech on the square. City Hall has promised to reconstruct the square by 2014.

Between 10a.m. and 4p.m. on September 14th, no vehicles were allowed onto the square, and only cars parked there previously were allowed to leave. The event was to serve as a test case for future redevelopment plans. Business owners said they were thrilled to see only pedestrians and cyclists passing by their storefronts. I have been experiencing since this morning what I have dreamed of for 25 years, the longtime owner of a hotel on the square told the Czech News Agency. I want to see Czechs here who are smiling and happy. This is something that is not normal here.