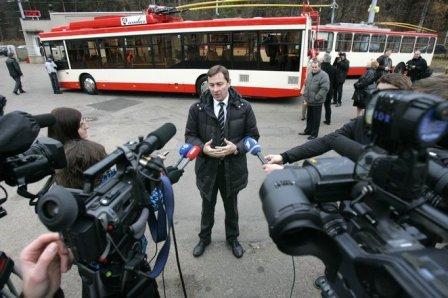 With a cost saving of up to 50 percent, self-assembled trolleybuses are the way of the future for the Lithuanian capital’s efforts to renew its ageing fleet.
In November, the city-owned company Vilniaus Troleibusai (Vilnius Trolleybuses) unveiled the first trolleybus assembled on its premises. Christened as the “Amber,” the new low-floor vehicle was assembled in two months from parts produced in Belarus, Czech Republic, Poland and Germany. Company leaders say each of the future buses will be assembled in 15 days at a cost of €209,000 (720,000 litas).

“It is 30-50 percent cheaper to assemble a trolleybus here than to buy it from abroad,” Vilnius Mayor Arturas Zuokas said at the ceremony at the company’s offices.

According to Vidmantas Romualdas Striska, Director General of Vilniaus Troleibusai, another advantage is that the Amber uses 10-15 percent less electricity than the Skoda trolleybuses that now dominate the city’s fleet. The Amber can also travel up to one kilometre without contact with the overhead electric line. It has a capacity for 100 passengers, is wheelchair accessible and is equipped with remote surveillance cameras to enhance security. Besides fulfilling a local need, the Amber has attracted interest from abroad, including Bulgaria and Italy, company officials said.

Vilnius has a fleet of 312 trolleybuses, with just 45 being less than five years old. Most are at least 15 years old. It is estimated that if the operating company rolls out 20 new Ambers a year, the fleet could be adequately updated in 10-12 years.