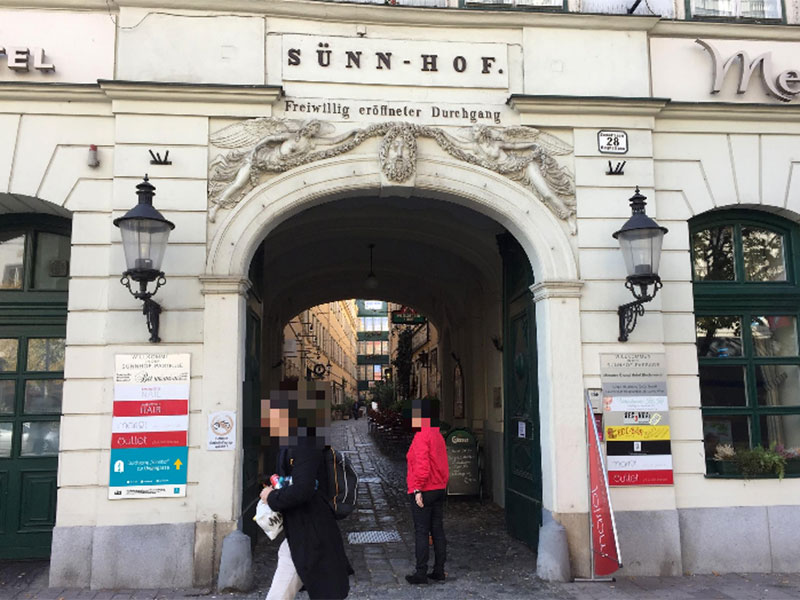 The streets of Vienna have a unique feature known as, “Durchhäuser” (which translates to “through-houses”) that are traditional, pedestrian-friendly shortcuts through the city. These through-houses offer pedestrians public passage through the building, itself. There are thought to be more than 700 of these shortcuts in Vienna and although some of these walking routes are well known, most have been forgotten and are only used by people who live in the neighbourhood.

The City of Vienna has started to signpost these Durchhäuser to raise awareness of their existence, increase usage and encourage walking in the city. The project starts with a test phase of 3 pilots in the area of the “Praterstern”. Turquoise signposts have been put up to give users information about how long it takes to walk the shortcut as well as when the path is available to use – some of the houses are closed at night time. The project has been implemented by the city of Vienna to improve the city’s walkability. Pedestrians are given better orientation and offered direct tracks and short-cuts that allow them to avoid walking around entire housing blocks – a special benefit for pedestrians who are the most sensitive to distance of all transport users.

Following the test period, the effects of signposting the shortcuts will be evaluated in March. The most interesting feature will be to see if shortcuts have been used more often than they were before the signposting was put in place. Once evaluated, if the pilots demonstrate an increase in usage, additional, extended signposting may be implemented throughout the city. The “Durchhäuser” shortcuts are already displayed in the free of charge Viennese pedestrian map as well as by online navigation tools such as “anachb.at” (from a to b).

Source: story first published by www.orf.at on 11th of February 2018