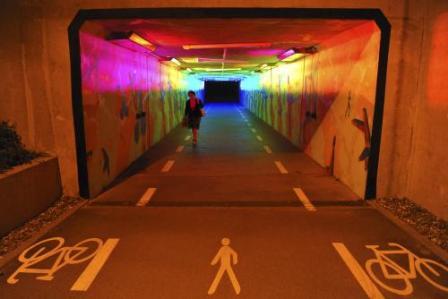 In a novel approach to street enhancement, a dynamic, coloured light show greets pedestrians and cyclists who go through an underpass in Brno.
An installation, unique in the Czech Republic and possibly in Europe, recently opened in Brno offering pedestrians and cyclists an interactive artistic experience as they pass through a short tunnel. The idea was to give passersby a pleasing alternative to the humdrum tags and scrawls that mar many such tunnels. In fact, the basis for the decoration is painted graffiti in blues, reds and greens. But when combined with a dynamic sequence of lights in the same tones, the graffiti comes alive and seem to move across the walls.

The installation was designed by Filip Mueller, from the Philips company. It changes colours according to the time of the day and seasons of the year, and it also reacts to the movements of passersby. Graffiti created in a suitable way in combination with a dynamic colourful light is able to set static pictures in motion and create dynamic scenes, Mueller explained.

Passing cyclists and strollers can control the moving scenes themselves by varying their speed as they pass the installation’s sensors, he said. Those who stop in the tunnel at night and wait until the lighting dims will be surprised as some graffiti are created with a colour spray containing glow-in-the-dark particles, Mueller said.

The project was initiated by CTP Invest, a company that owns a nearby office complex. To put it simply, we wanted our clients to have something to watch on their way to us, said company project manager Karel Smejkal. The subway's decoration has cost almost CZK 2 million (EUR 87,000).