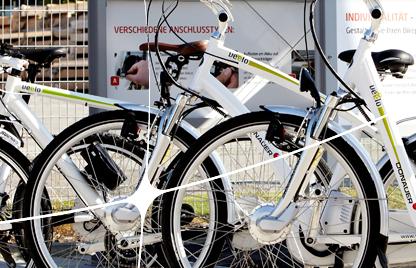 Two new bikeports charging stations were inaugurated in the city of Cascais, west of Lisbon. The set is the first of its kind to be installed in Portugal and will become part of the “biCas” municipally run bicycle sharing scheme.
Each of the new electric bicycle charging stations is equipped with four electric bikes. These will be integrated in the city’s free public bicycle sharing scheme named “biCas”. The scheme currently has 60 regular bicycles, which account for an average 27.000 trips per year. The new charging stations are completely solar powered and therefore clean, emitting no CO2 or other pollutants under normal running conditions.

According to Donauer Solar Systems, the German manufacturer, the charging cycle lasts between 3 and 4 hours, and up to 80% of it is done in the first two. Additionally, the system has a solar battery that allows it to work for limited periods of low solar intensity. Once fully charged, the e-biCas – as the new electric Cascais’ bikes are now named – have an autonomy of about 70 km. Moreover, their top speed of 25 km/h and seven gear mechanism, coupled with the relatively smooth terrain of Cascais, makes the new bicycles suitable for most trips inside the municipality.

The two “bikeports” were partially funded by the German Energy Agency – Dena – and provided free of charge to the Portuguese Municipality. Dena is promoting the internationalisation of German renewable energy companies, through the “Solar Roof Program”, by which it subsidises projects like the one in Cascais.

Under normal commercial conditions, the set of one “bikeport” and four electric bikes carries an eight thousand Euros price tag.