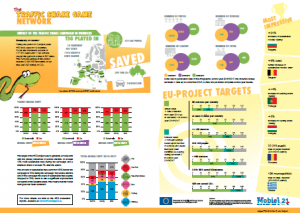 In February 2017, the TSG Network celebrated three EU-supported project years. In those years, the Traffic Snake Game campaign took place in 19 countries. So far, the impressive amount of 177 587 pupils in 1 192 schools played the game*.

The EU-wide savings in this period reached 2 458 853 kilometres of car trips and 397 tonnes of CO2. The target of the TSG project was to generate a modal shift with the travel behaviour of school children, of at least 15 per cent more sustainable trips during the campaign and a retention effect of at least 7 per cent after the action.

This means that the modal shift goal has been achieved! The results shows how much can be done by focussing on people, and how behaviour can change through campaigns.

The Traffic Snake Game campaign shows how 'soft' measures can promote sustainable transport and manage the demand for car use for home-school traffic. In order to make long-term changes, policy makers at all levels need to provide the necessary conditions to cultivate and harvest this modal shift.

People are willing to change behaviour already. Imagine what better infrastructure and better services for walking, cycling and public transport could do in your neighbourhood, municipality, city, region, country,… When these 'hard' measures and 'soft' measures go hand in hand, they enhance each other.

This video summarises the three-year project in less than five minutes.