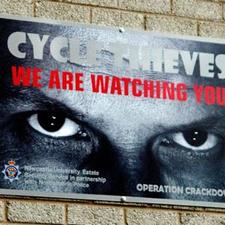 Bicycle thefts have dropped by more than half after posters showing staring eyes were placed above the bike racks, research by Newcastle University has found.

A two-year experiment on the campus, which involved the research team putting up the posters with its short anti-theft message, reduced thefts by 62% .

The research revealed a noticeable difference in locations without the signs, where cycle theft rose by 63%, suggesting that such crimes had been displaced to other locations, rather than being eliminated. The findings have led to changes on campus, and the team are working with police forces across the UK to advise them on how they may be able to use the research.

The methodology used consisted of the team monitoring the level of bike theft at all racks across the campus in the first year to produce a control figure. The signs were then placed in three locations, leaving the rest of the racks without signs. It was then further monitored again for a year to see what the impact on the level of crime would be.

Professor Daniel Nettle, who was involved with the research, said: “We think that the presence of eye images can encourage co-operative behaviour. One strong possibility is that the images of eyes work by making people feel watched...The next step would be to increase the scope of the experiment across a citywide area to see if the effect is maintained, but the pattern definitely looks like it is worth exploring further.”

British Transport Police is now trialling a ‘staring eyes’ scheme with the C2C train operator, on the company’s Fenchurch Street to Southend coastal route in Essex.