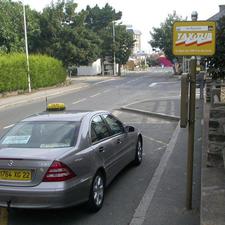 An innovative French scheme appears to have solved many of the financial and operational issues around the provision of Demand Responsive Transport.
The scheme, based around St Brieuc (Brittany), uses bespoke computer technology to deliver a comprehensive half-hourly ‘virtual’ bus network in rural areas, which cannot sustain conventional bus services. It books and plans journeys on local taxis, and automatically pays taxi providers.

While the advantages of Demand Responsive Transport (DRT) are well recognised, schemes have generally been too expensive to act as a replacement for conventional buses, even when planners and providers recognise that regular buses may not best meet the dispersed journey requirements common to many rural areas.

Each TaxiTub “bus stop” (some of which serve only a handful of houses) is allocated a three digit code, as are the destinations within St Brieuc’s urban area. Journeys are available at half-hourly intervals (0630h-2000h) from any pick up point, but the run only on request. When users want to catch their transport, they use a telephone or internet booking system, entering their membership number, the code for their origin and desired destination, and the number of people travelling, giving at least 45 minutes’ notice. The notional timetables and use of virtual bus stops, at distances of up to 800m from users’ homes, means that the scheme is more cost effective than completely flexible door-to-door DRT, by ensuring that people travelling at approximately the same time of day book onto the same vehicle, and are picked up at a single location. TaxiTub’s computer automatically assigns the requested journey to a local taxi operator, giving details of pick up and drop off times and number of passengers. Passengers pay the taxi driver for a public transport-type ticket which fits into the local fare structure and is the same as conventional bus fares.

TaxiTub’s computer organises reimbursement to the taxi operators, but also monitors failure to provide a journey by taxi operators. Similar arrangements apply to repeat no-show passengers, whose membership of TaxiTub can be rescinded. TaxiTub’s computer system can also identify passenger flows which have regular, significant demand, and one such flow has been upgraded to a conventional bus service. Taxitub also provides half hourly journey options along conventional bus routes where the buses run less frequently.

Fully integrated into St Brieuc’s public transport network, passengers can change onto a conventional bus to complete a journey into town, using the same single ticket bought at the start of their journey. Again, the computer system works out such interchanges automatically, and tells the taxi driver where to drop off passengers.

For an annual cost of 376,000 Euros, TaxiTub provides a virtual network of 60 routes, running every half hour, with 310 pick up and drop off points. Ticket sales make a small contribution to the running costs while the local Versement Transport tax, levied on employers in France, covers most of the subsidy requirement.