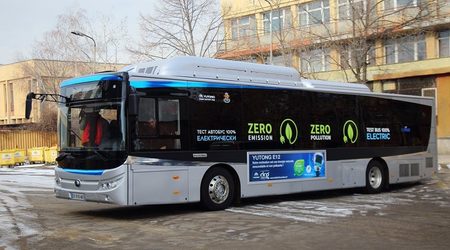 The city of Sofia is introducing an electric bus on its roads to test its suitability for a larger-scale roll out.

The Chinese-made Yutong bus will begin operating on the city’s No. 84 bus line from Sunday 15 January until May.

The bus will travel between the city and Sofia Airport which, according to the mayor of Sofia, Yordanka Fandakova, is one of the most polluted routes in the city.

The bus can travel up to 300 km on a single charge, which is enough for its needs when operating in Sofia’s urban areas.

The new bus comes with the installation of a charging point which can fully charge the batteries of the bus in four to five hours.

This will be the second test of an electric bus conducted by the municipality. The first was in May 2014 with a bus that was equipped with an ultra capacitor system.

The system delivered around a 25 km range with two charging stops – one at the end station of the bus route and one in the downtown area. The charging took up to seven minutes.

Following the test, the municipality will come to a final decision on what kind of electric bus to introduce into its public transport fleet.