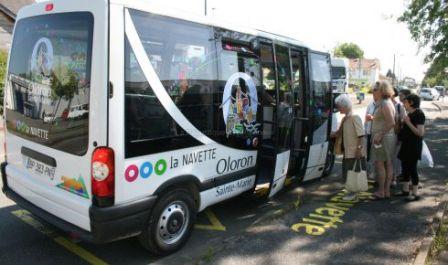 Launched in 2011, La Navette is the urban minibus network of Oloron Sainte-Marie, a town of 11,000 inhabitants in the Pyrénées-Atlantiques in south-western France. The neighbouring town of Orthez now also wants to introduce a similar service under its new local urban plan (Plan Local d'Urbanisme).
The small scale of a town is not a limitation in introducing a tailored public transport system which provides residents with a sustainable and collective alternative to cars. The positive experience of Oloron, which now has 4 minibus lines in service from Monday to Saturday during the hours 7:50-12:30am and 2-6:30pm, is inspiring for other similar cities.

The discussion about the navettes (shuttles) is not an isolated item but a key part of the urban planning process. In the town of Orthez, just 44km from Oloron, a study evaluated the feasibility of the service in its project planning and sustainable development Projet d'aménagement et de développement durable). This was presented to the Council one year ago.

Subsequently, a 9-seater minibus was used for testing the new service last summer. This allows an initial assessment of needs, said Fabienne Pit, second deputy assistant in charge of environmental issues and urban planning. The experiment was primarily focused on seeing how the different routes can be organised and what are the preferred routes.

The launch of the minibus on the streets of Orthez is not fixed but linked to the comprehensive revitalisation and remodelling of the city centre. In this context, some changes in vehicle flow directions may occur, says Fabienne Pit.