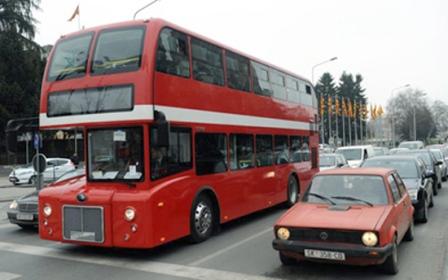 A first shipment of red double-decker buses arrived in Skopje this week, giving the Macedonian capital an emblematic public transport fleet that’s both modern and nostalgic.
The 68 custom-made buses, produced in China’s Zhengzhou Yutong factory, represent around one quarter of the 220 vehicles ordered by the government last year in a bid to add a distinctive flair to the capital’s transport system. The buses were specially designed to resemble the British-made Leyland buses used in Skopje during the 1950s and 1960s. The buses were to be put into operation on September 8th, the day of Macedonian independence.

City authorities say the aim is to bring back Skopje's old flair. The move dovetails with an ambitious government plan to revitalise the capital with new buildings and monuments. The buses will be recognisable as unique to Skopje and will not be used elsewhere,” Transport and Communications Ministry spokesperson Dragan Simonovski told the SETimes. “They are not mass produced. But some, including opposition parties, have argued mass-produced buses would have been a wiser choice. They complain the vehicles’ retro-look and tall profile will require expensive infrastructure adjustments. The double deckers themselves cost more than €41 million.