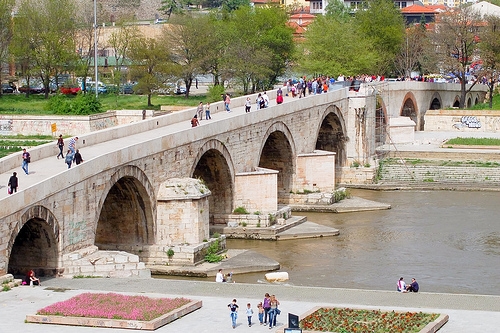 A new app has been launched that makes getting around Skopje, the capital of the Former Yugoslav Republic of Macedonia, easier and more environmentally friendly than before.

The Skope Green Routes Planner provides travellers with all the information they need to plan cheap, fast and green routes to their destinations. The app makes use of Google Transit, a Google Maps feature which allows basic journey planning using publicly available information.

Data from sensors installed by the city government at key intersections and along the most heavily-used routes is collected by the app. Users can then see information on traffic congestion, pollution, and the availability of public bikes, parking places and bus services in real time.

Development of the app was achieved through close co-operation between the United Nations Development Programme (UNDP), the City of Skopje, and the Macedonian Ministry of Environment and Physical Planning.

UNDP Resident Representative Louisa Vinton praised the app’s innovative use of big data. 'This project shows that scalable, data-driven climate solutions can be adopted anywhere in the world, and that leaders from all sectors can work together to build a safer, healthier, and greener future.'

The app was released during European Mobility Week, the Europe-wide campaign which encourages local governments and residents to promote and use sustainable modes of transport.