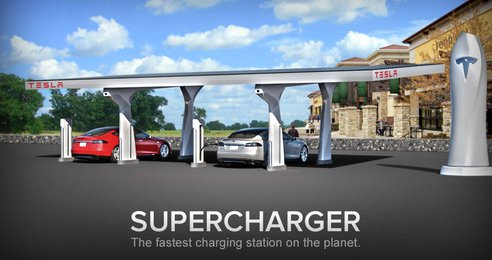 On 24 September, electric car manufacturer Tesla unveiled a new network of ultrafast charging stations. Six stations were already built in California, but within two years, the network should cover a large part of the entire United States.
Tesla secretly built its six first Supercharger stations, which have been tested by real users and are now ready to go. The all-electric driving range around the stations covers almost the entire state. There has been media speculation about the company extending to Europe and Asia after conquering the entire United States.

The amount of current they can charge into a Model S battery pack is high: around 100 kilowatts now and potentially up to 120 kilowatts in the future. That is more than 4.5 times more than any charging station. In half an hour, the station can add about 240 kilometres of driving range to the battery of the car.

Superchargers are located at places you’ll actually want to stop, like roadside diners, cafes, and shopping centers,” says CEO Elon Musk. “So pull in, plug in, and grab a bite to eat. Model S will be ready when you get back.

The stations will include solar panels that are sized to produce more electricity than the cars charging at the station will consume. So over a year they would actually be net contributors to the power grid, and this means that Tesla owners who charge there will actually be driving on sunlight. And the best news for the consumer is that the Supercharger stations are free, and will remain free forever, Musk promised.