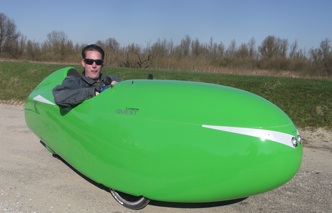 Roll over America (ROAM) is a unique velomobile tour across the entire United States: Some 50 riders from Europe and North America, mostly regular bike commuters, will ride 5.000 km from Portland, Oregon to Washington, DC over four weeks, beginning July 28th.
They will introduce the velomobile to a wider American public and visualize the benefits and fun of modern zero-emission personal transportation. In addition, ROAM will seek to raise awareness for European Cyclists' Federation Velo-city project (the international cycling planning conference series). Velomobiles are considered to be the most efficient human powered vehicles, equally versatile for the daily commute and long distance touring. ROAM brings established practice from Europe to North America. Most riders on the tour use their velomobiles to commute every day. Velomobiles are obviously a peculiar case but their practice is a symbol for the „bike to work“ movement, which has become quite popular in a number of European countries.

Congressman Earl Blumenauer (D-OR), founder and co-chair of the Congressional Bike Caucus states: „Roll over America is an exciting tour that will showcase the benefits and practicalities of velomobiles for long-distance travel as it brings national visibility to the health, fuel-efficient, and environmental value of human-powered vehicles. Whether you’re on two wheels or three, headed to the neighbourhood store or across the country, human-powered vehicles -- in their many forms -- are the most efficient means of transport ever devised.“