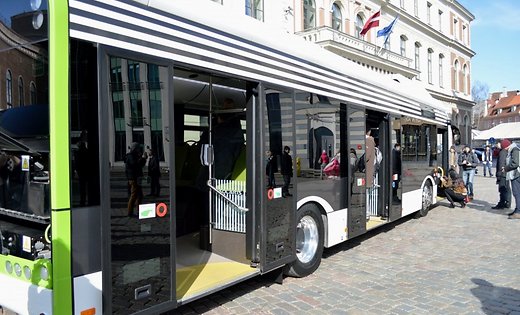 The Latvian city of Riga has just completed the trials of an electric bus on three of its routes.

Public transport operartor Rīgas satiksme said that the tests showed that it is now focusing on introducing environmentally friendly technologies.

The batteries in the Solaris Urbino Electric 12 buses take about 5-6 hours to charge, following which the bus can travel up to 150 kilometres. Introducing electric buses to its fleet will also lower maintenance costs.

Before the trials commenced one of the models went on display by the Riga Town Hall, allowing visitors to explore the vehicle from the inside.

Riga has stopped buying diesel-fuelled buses, and is deciding on whether to procure fully electric buses or buses running on hydrogen.

The city is also involved in a pilot project exploring the possibility of expanding hydrogen cell technology for its buses, and is examining in which part of the city it could install a hydrogen filling station.