Public transport is 100% accessible to disabled in Grenoble (France) 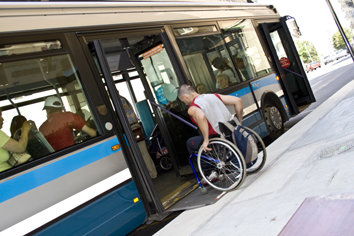 Four years before the deadline set by a French law on accessibility (2015), Grenoble city transport is fully accessible to disabled people.
The entire network of Grenoble is accessible to the disabled. This is a premiere, said the leaders of the public transport union (SMTC) in Grenoble. Maybe ... and maybe not, but for sure, this is the first time in France and that's good news: all regular lines of the city transport network, trams and buses, have been declared wheelchair accessible. Four years before the requirement set by law.

In 1987, Grenoble (Alps) was the second French city to go for a modern tramway, and asked transport company Alstom to makes it wheelchair accessible. From 1995, the city of Grenoble launched an extensive accessibility programme for its buses and at all its stops, accessibility that is not limited to the physically disabled. Thus, those who can't see are guided by tactile paving on tracks and stops, and sound notices. Deaf people benefit from visual dynamic information devices. As a result, every day, 400 people in wheelchairs use the city bus and tram network and apx 125 trips are made by people with reduced mobility.