Public says thank you for mobility improvement in Budapest (Hungary) 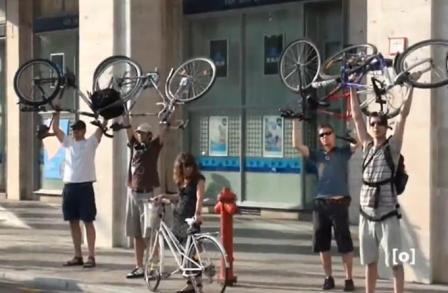 Cycling activists have organised a public thank you in Budapest. The works are not yet officially inaugurated but the public can enter the reconfigured ‘Small Ring’ of Budapest, featuring state-of-the-art mobility solutions.
Budapest’s Small Ring was one of the busiest throughfares in the centre of Budapest, and subject to numerous debates about how it should be modernised. The most controversial issue being taking away road space from car traffic and parking places, in favour of pedestrians, cyclists, public transport and trees.

For years there have been very heated debates, with every possible obstacle being put against progressive public space reconfiguration, from shop owners to public authorities through parking lobbyists. As Gábor Kürti, the head of Budapest’s largest bicycle courier company and cyclist lobbyist put it: it has been a long story of “yes, no, yes, no, yes, no, yes, no, yes, no”. And eventually: yes!

As works are now completed, it is time to celebrate: the new Small Ring satisfies all wishes of those in favour of sustainable urban mobility and liveable public spaces. To mark this occasion, after years of demonstrations, cycling activists have organised an official public thank you. Only a month after the huge success of the Budapest Critical Mass cycling demonstration, this event has been dubbed the ‘Happy Mass’ demonstration, thanking all planners, decision makers and lobbyists who contributed to this success.