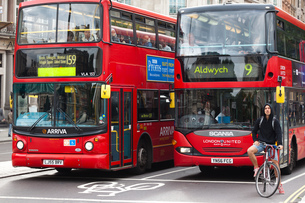 Up to 1,000 buses will be fitted with innovative equipment to reduce pollution as part of the Mayor of London’s plans to deliver cleaner air in the UK capital.
London's bus fleet is already the cleanest in the UK but buses are still a major source of NOx - a harmful pollutant - especially in inner London. The new equipment will cut NOx emissions from buses by around 400 tonnes - around 10% of all bus NOx emissions - making a substantial contribution to delivering the Mayor's air quality ambitions.

The initiative will be the biggest of its kind in Europe and follows a commitment of £5million (€5.9) from the Department for Transport and an equal sum from Transport for London (TfL).

Following a year-long trial of the selective catalytic reduction equipment currently on a small fleet of buses, TfL will begin converting buses on routes where concentrations of NOx are highest, with the first conversions expected by summer 2012.

Currently, all 8,500 London buses meet the Euro IV standard for PM (particulate matter) and are compliant with the next stage of Low Emission Zone requirements being introduced next year. This new equipment will be fitted to older Euro III buses to bring them to Euro IV NOx standards. TfL estimates that by 2015, 7,500 buses will be Euro IV NOx compliant (through replacing older buses with newer, cleaner models or through retrofitting). Additional funding is now being sought for the replacement or retrofitting of an estimated remaining 1,000 Euro III buses which would need to meet this standard by 2015.