Promoting the bicycle in Belgrade 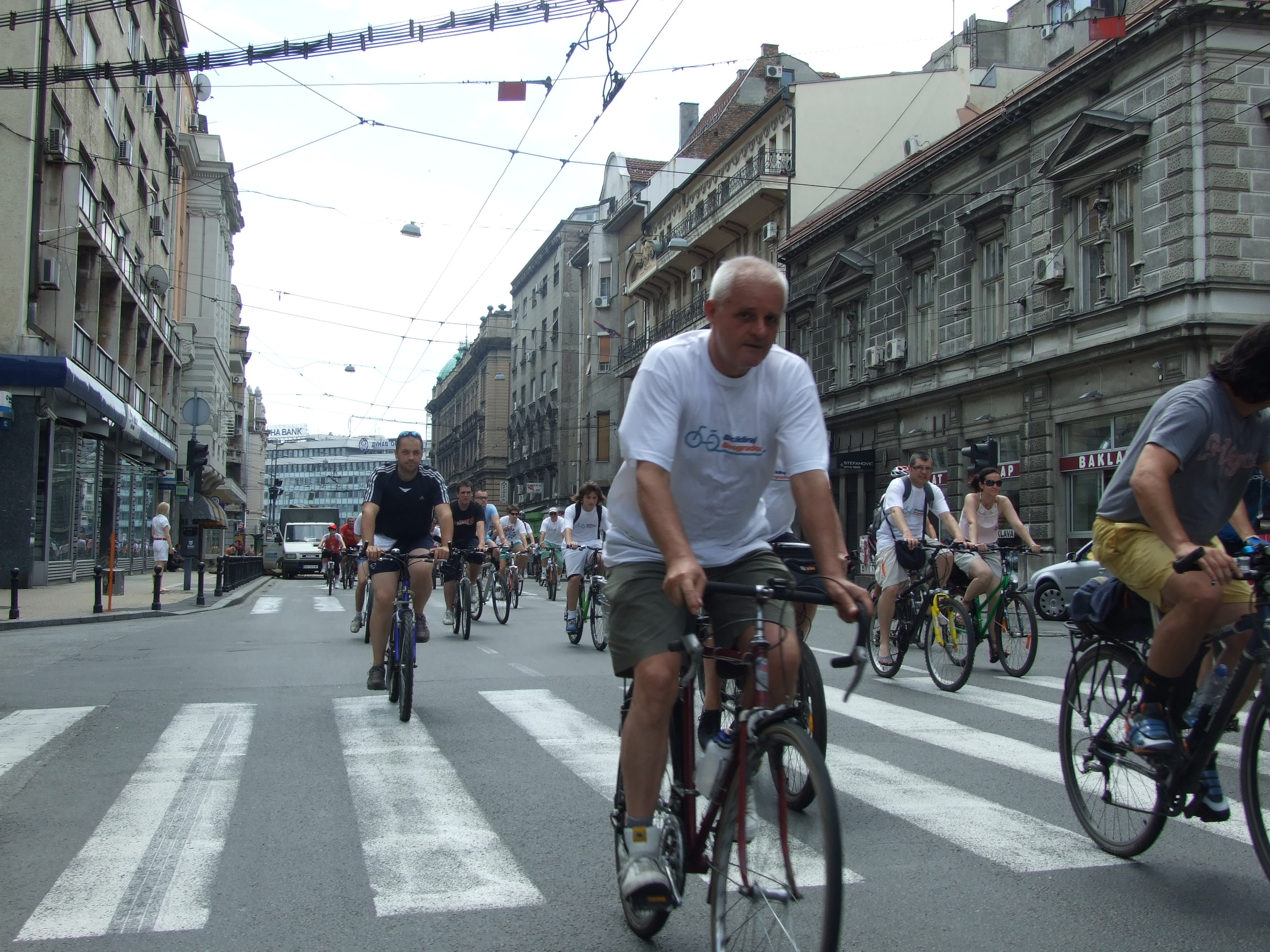 On 10 June at 10.30, a couple of hundred cyclists gathered on their bicycles in the main square of Belgrade, Trg Republike, to participate in the “Cycle Belgrade” event and give support to this endeavour.
The hot weather did not impede the residents of Belgrade in pedalling through the centre of the city, across Branko’s Bridge to the other side of the Sava River, and up to the plateau on Usce. The aim of the 2.8km long ride was to promote greater use of the bicycle in the city alongside motorised vehicles.

The activity was initiated with the launch of a public awareness campaign and survey. 900 residents across Belgrade responded to the survey. Results showed that slightly below 1% of residents use the bicycle as a means of transport, most of them pointing out that safety and lack of cycling infrastructure are the main obstacles in further promoting this mode.

The findings of the survey were presented at a public open debate that took place in April in Belgrade, with around 100 participants, including many avid cyclists who commute regularly. Surprisingly, their almost unanimous opinion is that the construction of more cycling lanes exclusively for cyclists is not required; marking the existing infrastructure would be sufficient in order to alert drivers to the presence of cyclists. Awareness needs to be improved among all road users. Both drivers and cyclists must learn to share the existing infrastructure by respecting the traffic rules and being particularly attentive at intersections.

The feedback from the cyclists at the open debate was quite contradictory to the results of the survey. There was an opportunity to the situation on the ground through a bicycle ride event across the streets of Belgrade under the dictum “Cycle Belgrade” (in Serbian, 'Bicikliraj Beogradom').

The event is part of a public awareness campaign that was launched late last year and will run until the end of 2013. It aims to promote the share of cycling in urban transport. Cycle Belgrade would not have been a success without the help of the “goodwill ambassadors” and “heroes” that supported it.

The recent survey shows that around 17% of residents ride a bicycle at least several times per month (mostly for leisure). Among students, the bicycle is the first sport of choice (78% ride a bike weekly). There is therefore potential to encourage recreational cyclists to use a bike for daily commuting. A large number of residents have pointed to safety as the main obstacle to cycling in the urban environment, and this clearly needs to be addressed.

Late last year the UNDP began an analysis of road safety for cycle commuters in the urban transport in Belgrade. This will lead to a policy paper to support the local and national authorities in improving road safety, and to fully align the city with the international conventions and EU directives in this domain. An encouraging fact is that in 2011 only one cyclist fatality was recorded in the urban traffic in Belgrade, while ten years ago there were 11 cases. Work will continue in the education of all participants in urban transport, on sharing the roads, routes and paths while respecting the traffic rules and one another's rights.

Mobility is an essential right and everybody is entitled to it

Although lagging behind some northern and western European countries, Belgrade is undertaking activities across the private and public sectors that are essential precursors to both stimulating further cycling amongst existing cyclists and encouraging new riders. Another city-wide event to promote cycling will be held during European Mobility Week, 17-22 September.

Current and supplementary activities designed to enhance participation in cycling across the social strata will result in both tangible and intangible benefits to health, congestion, the economy, and the environment. The dictum ‘Bicikliraj Beogradom” is arguably more relevant than ever.