The positive side of bike theft (Lithuania) 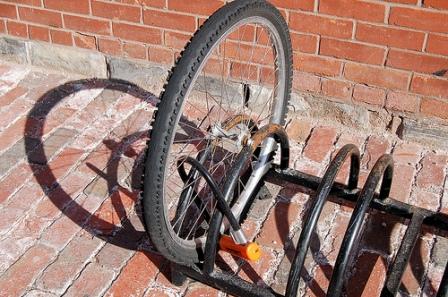 The increase in bike theft in Lithuania is actually a good sign, according to a major insurance company, as it reflects increasing levels of cycling.
Lithuania's largest insurance company, AB Lithuanian Insurance, recently noted that thieves nabbed 30 percent more bicycles in 2011 than they did in the previous year. Bikes are taken from storage rooms, underground garages and basements, according to insurance claims. Besides bikes, thieves go after furniture, garden equipment and lawnmowers. They have even been tempted by hay left in people’s yards.

The changing nature of stolen loot does not reflect changing tastes among thieves but rather the evolving lifestyles of Lithuanian residents in general. Targets reflect the changing lifestyle of the population,” said Executive Manager of Property Insurance at Lietuvos Draudimas Andrius Gimbickas, in a report in the Baltic Times. “As the popularity of bikes increases more of them are purchased. As a result more of them are stolen.”

Gimbickas speculated that increases in fuel prices and lifestyle fashions were two of the reasons that more Lithuanians are riding bicycles. He noted as well that summer is the high season for theft, as perpetrators target the unattended homes of people on holiday.

The average financial claim for a bicycle theft is about €434 (1,500 litas), according to the news report. That sum increases year by year because Lithuanians are buying and insuring more expensive bikes.