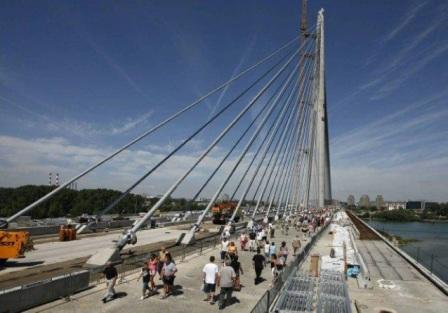 During the August 13-14 weekend, some 65,000 people in Belgrade strode across a new bridge spanning the Sava River.
Work on the bridge was held up for two days to give residents of the Serbian capital an opportunity to walk across the new bridge and 'look it' over. Construction continued on the following Monday. The new bridge joined the two banks of the river on August 8 when the final steel segment of the main span was set in place. Both the Serbian president and Belgrade’s mayor were present. According to plans, the bridge should open to motor vehicles on December 15, when the first access roads are ready. The bridge should be completely built in 2013.

The bridge will become a prominent city landmark with its central, 200-meter high pylon and 964 metre length. The structure is 45 metres wide, with six lanes for motor traffic, two light-rail tracks and two paths for pedestrians and cyclists. The bridge will be part of Belgrade’s inner semi-ring road and will be an important crossing for both local and through traffic.

Recently, City Hall invited citizens to suggest names for the bridge. The final name won’t necessarily be selected from these nominations but the city has promised to consider them along with those that have already been tabled.