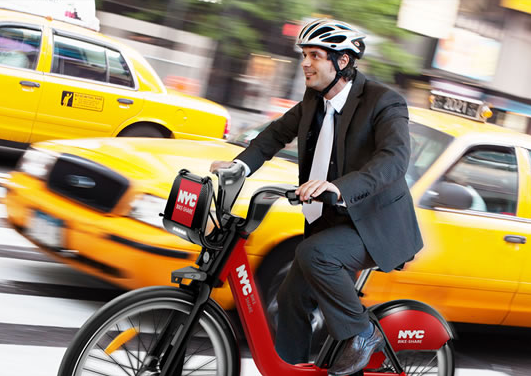 Due to be launched in the summer of 2012, the New York scheme is set to be the largest bike sharing system in the United States, and one of the largest in the world. It will include around 10,000 bicycles distributed over 600 stations across the Manhattan and Brooklyn boroughs.
Alta Bicycle Share is the new bike share operator in the City of New York (NYC). The new operator was announced by the local authorities at a news conference on September 14th. At the event, the NYC Department of Transport (DOT) Commissioner, Janette Sadik-Khan, declared that “whether it’s covering the last quarter mile from the subway or reaching that dead zone between stations, bike share offers a great new way to get around in a New York minute (an instant) and will bring needed jobs and revenue to the city.”

Previous attempts to introduce a bike sharing scheme to NYC have been faced with stiff opposition and criticism, fuelled by fears ranging from the potential use of public money in such a venture, to a reduction in the number of on-street parking spaces. Now both public authorities and the private operator stress that no public money will be spent on the project, which will be supported by sponsorship and ridership fees, and that the occupation of car parking spaces will be kept to a minimum. To this end, the 600 solar-powered stations will be primarily installed on sidewalks and other pedestrian public spaces, like squares and other public areas.

Although the bike sharing scheme is due to roll-out next Summer, with a test phase planned for the Spring, a major hurdle exists, as the operator is still seeking sponsors to foot the 50 million dollar bill. As mentioned, the operational phase will be partially covered by ridership fees. Although the final price scheme is still in negotiation, the operator announced that an annual membership, which will allow unlimited 30-45 minute trips, will cost less than 74 Euros.

The bicycles and bike sharing stations planned in NYC are of the same type as the ones currently used in cities like London, Montreal, Toronto and Minneapolis. In addition, the system will allow smartphone users to check, in real-time, the availability of bicycles at the stations.

Alta Bicycle Share already runs bike sharing systems in the US cities of Washington D.C. and Boston, and in Melbourne, Australia.

As part of the goal to involve the New Yorker community in the project, DOT launched a website www.nycitybikeshare with an interactive map where people can suggest locations for the new bike share stations. According to the New York Times, hundreds of suggestions had been posted just hours after the announcement, including one from the NYC Mayor, Michael Bloomberg, who suggested a location near the City Hall.

According to the operator, up to two thirds of all trips in New York are under five kilometres in length, with about 40% being under 1,6 km. In the same statement, Alta claims that NYC roads are now the safest in recorded history, both for drivers, cyclists and pedestrians.