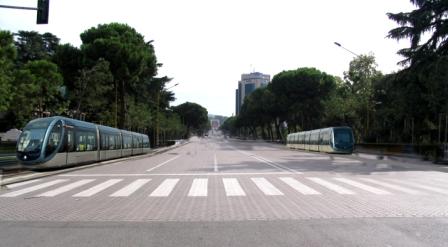 The adopted Regulatory Plan of 1989 did not forsee or plan for such a massive expansion of the city. Due to this, the Municipality of Tirana decided to prepare a new regulatory plan that will better respond to the current situation of land use and will accommodate the needs of city for planning and development. Its main focus is on urban development, with significant implications on future transport planning - most importantly the road network. This new plan came into force in 2013.

Until 1990, Tirana's mobility was characterised by pedestrians - and hardly any motor vehicles. The urban structure reflected this sitution, e.g. no hierarchy developed in the road network, there are no avenues or ring roads, and there are many dead end roads. The public transport system is also very poor, and is primarily based on buses - a public transport network which does not always follow the main directions of actual passenger flows.

The situation has dramatically changed with the introduction of 140,000 motor vehicles on Tirana's roads. Traffic jams and parking problems have become a major problem - along with the low level of discipline and respect among car drivers. Pedestrian spaces are not organised into a network and are not consistent. The same can be said for bicycle traffic. Although there are sidewalks and, in some cases, bike lanes, they are so few and so disorganised that they do not provide a safe network.

As well as tackling a number of other issues, the new Urban Development Plan proposes a number of measures - primarily with a focus on the road network and, to a smaller degree, on sustainable modes of transport. Proposed measures include: 1) Construction of a hierarchical road system, i.e. developing a radial-concentric pattern with the construction of five rings levels and large road axes in the city; 2) Providing new space for parking; and 3) Building an integrated public transport system. The latter includes the construction of a tramway system in addition to the bus system.