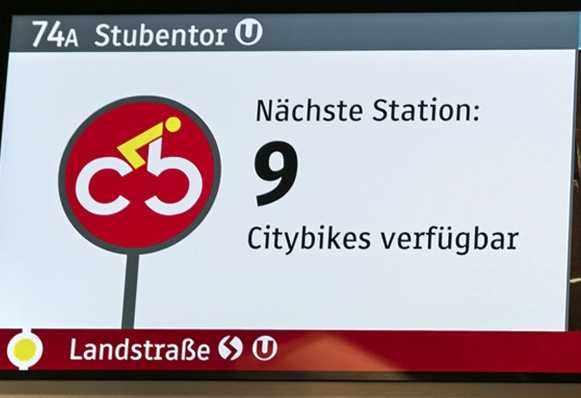 Vienna has introduced software on trams and buses that shows passengers the number of bicycles available at upcoming stops with bike-sharing terminals.

The technology – a joint project between public transport operator Wiener Linien, Citybike Wien and INFOSCREEN, the manufacturers of the screens - was trialled in August and fully introduced across the city earlier this month.

The software has access to the Citybike Wien server, which allows the screens to show passenger real-time information on the number of bicycles currently available at each stop.

However, at peak times some terminals have no bicycles. Displaying the number that is available at upcoming stops allows passengers to make better decisions about where to rent a bicycle.

INFOSCREEN CEO Franz Solta said that in addition to traditional news formats and weather, the technology could soon provide valuable information for passengers based on their location.

‘That may be about waiting times for museums and exhibitions, or the opening times of [nearby] offices,’ he said.