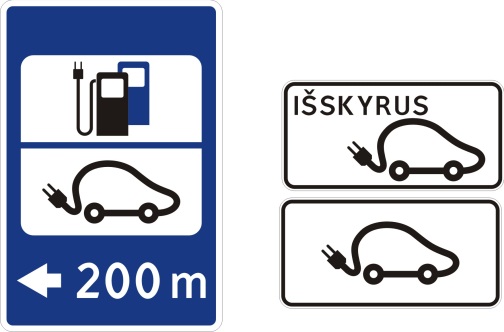 Next year new signs for electric vehicles will appear on Lithuanian roads. Public transport lanes may also be used by lightweight cars with no less than 4 passengers on board.
These as well as some other changes are dictated in the new Road Rules which were approved by the Lithuanian government at the start of January 2013.

During the coming year, three new signs associated with electric vehicles will appear in the Road Rules (Highway Code). They will show electric vehicle charging stations, cases where road signs do not apply to electric vehicles, as well as parking spaces for all electric driven means of transportation.

Renewed Road Rules will also now allow electric vehicles as well as lightweight cars with no less than 4 passengers on board to be driven in public transport lanes. Such lanes will be marked with symbols of electric vehicles and 4+.

“Recent change was made due to the proposal of Vilnius city municipality. It was introduced in order to encourage people to co-operate during peak hours and use fewer individual cars. Which of the public transport lanes be dedicated to such vehicles will be decided by municipalities themselves”, - said minister of transportation Eligijus Masiulis (now the former Minister).

The new rules also stipulate to unify the speed of lightweight cars and motorcycles on the highways and motorways.
Country:
Lithuania
Topic:
Clean and energy-efficient vehicles