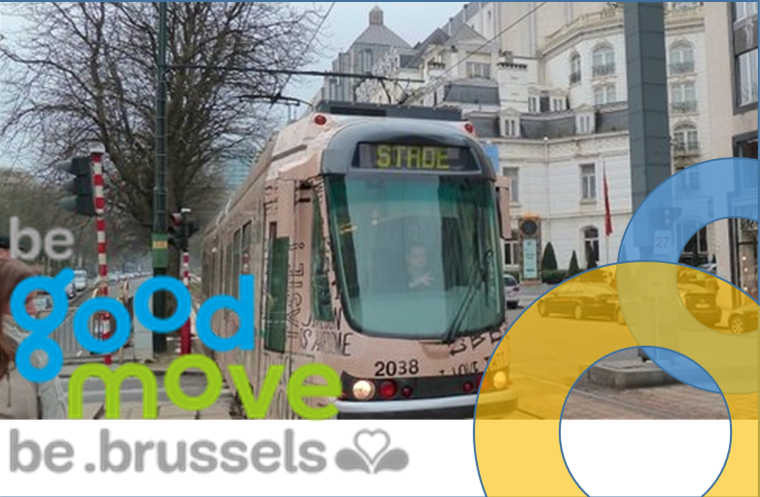 On 4 April 2019, the Government of the Brussels-Capital Region approved "Good Move", the regional mobility plan for the period until 2028.

The plan focuses on safety and quality of life by focusing on making neighbourhoods car-free, improving public transport, reducing private car ownership and better managing incoming car traffic. Specifically, the plan aims to reduce car use by 24% and quadruple the number of bicycle trips.

Why a new plan

Good Move replaces the current mobility plan, IRIS 2 that was developed in 2010 and included ambitions to reduce car traffic by 20%, to guarantee accessibility and to improve the quality of life of Brussels’ residents. Although many of the strategic directions provided in the previous plan remain valid, there was still a clear need to develop a new plan.

Securing sustainable mobility is a crucial challenge for the Brussels-Capital Region. The Capital Region is one of the most congested in Europe and in a 2018 benchmark study by the German Wuppertal Institute ordered by Greenpeace, comparing 13 large European agglomerations, Brussels ranked lowest on mobility management and promotion of modal shift away from car use, public transport use, active mobility and cycling safety.

The importance of the issues and the changes experienced by the Region created the need for a more proactive approach. In addition, there was a strong need to make regional and municipal mobility strategies and projects more consistent with one another. In response, the Brussels-Capital Region approved an Ordinance on 26 July 2013 giving regulatory status to its new Regional Mobility Plan.

The Good Move plan aims to be more concrete and more precise than its predecessor. It covers the period 2018-2028, but also aims to provide a strategic outlook on longer-term prospects and developments in order to anticipate developments in society, and in particular changing travel habits and new digital technologies.

Pascal Smet, Minister of the Government of the Brussels-Capital Region, responsible for Mobility and Public Works said: “It is clear that with this plan we have made the transition from a city for cars to a city for people. In the past, such plans remained stuck in numerical objectives and general principles. Today we have a broadly supported concrete catalogue of measures and principles that can be immediately translated into policy.”

A key part of the plan is to bring back and re-enforce a hierarchy of roads based on their function. A distinction is therefore made between the major access roads and connecting axes, the normal roads and the local access roads. Some 50 neighbourhoods will need to be transformed into low-traffic urban areas with low (30 km/h) speed limits.

“We have to clear these neighbourhoods through-traffic and you must enforce zone 30, not only through checks and fines but also through the layout of your street. Only local traffic will be allowed in these neighbourhoods and that traffic will have to comply with the 30 km/h speed limit,” said Pascal Smet about the plans. In addition, the plan provides for substantial investments in public transport and the development of a network of cycling infrastructure.

Furthermore, Good Move aims to promote and develop the concept of MaaS (Mobility as a Service) and it plans for the implementation of an integrated electronic ticketing system for (public) transport or mobility services in the Capital Region.

The development of the plan has been inspired by lessons learned from other cities and input from a wide range of public and private stakeholders, including transport users. Lessons were drawn from six particularly innovative cities that have implemented a global mobility approach as part of an urban quality project. These are Barcelona, Bordeaux, Copenhagen, Geneva, Helsinki and Munich and are all comparable to Brussels in terms of size, are also major administrative centres - and/or home to numerous companies and institutions.

The plan was created in a very participatory way and is therefore widely supported, says Pascal Smet. The plan went through an elaborate process of formal consultation of municipalities, the police and mobility service providers. In addition, a call for ideas from the general public was launched on the platform Good Move by Citizens. It produced more than a hundred concrete, original and inspiring proposals for mobility in the Brussels-Capital Region, the best of which have been considered in the plan.

Now that the plan has been approved in the parliament of the Brussels-Capital Region, it will now be open for official public consultation. A public consultation will run from 15 June to 15 October 2019. During these four months, residents can contribute via the website http://goodmove.brussels/nl/. The plan is accessible online via the same address. The general public can also access the plan in any of the 19 town halls of the Region.