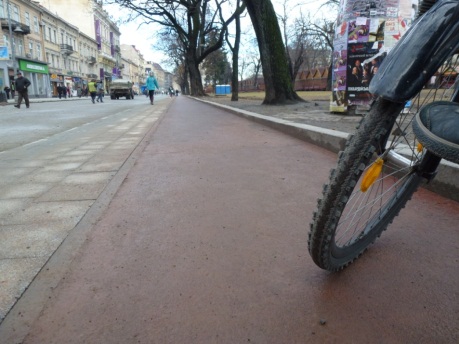 A new cycling lane has been constructed on Prospekt Svobodi in Lviv, Ukraine. Lviv is the first Ukrainian city to feature a cycling lane on the main street at the expense of private cars.
In 2011, Lviv started to implement its comprehensive cycling programme, building the first new cycling routes on the central Prospect Svobodi (Freedom Avenue). This is the main arterial road which links the southern and northern districts of Lviv as well as part of the historic city centre. In the course of the reconstruction of Prospect Svobodi, the decision was taken to reduce the width of the carriageway for cars and to introduce a cycling path on the left side close to the green median area. In order to improve the visibility of this new infrastructure, the colour red has been used.

The new path provides a high quality facility for cyclists in the city centre, linking important points of interest and offering a comfortable opportunity to cross the city centre quickly. The first stretch links the famous Opera House with Hnatyuka Street (close to Grand Hotel).

In spring 2012 the cycling path will be extended to Mickiewicz monument. The cycling path is part of the envisaged inner-city cycling ring which was approved by the Executive Committee of the City of Lviv in December 2011. According to the approved plans, the city will feature about 270 km of cycling infrastructure by 2019.

Lviv is the centre of Western Ukraina and has a population of about 760,000 people. The city centre is listed as a UNESCO World Heritage site. Lviv will host three matches of the EURO2012 championship.