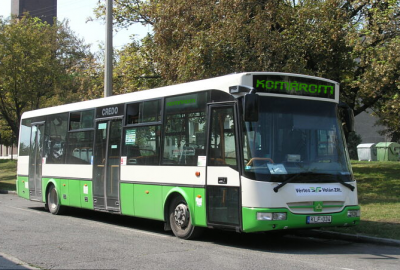 With the introduction of the ‘Schengen borders’ and the extension of the sub-urbanisation process a number of new cross-border local public transport services have recently been introduced. The latest is a bus service connecting the Hungarian town of Komárom and the Slovakian town Komárno.
There are a number of cities and villages along the Slovakian/Austrian/Hungarian border that are in close proximity to each other. However, until the introduction of the ‘Schengen borders’ no local public transport services existed between the neighbouring villages and towns.

As the Slovakian capital Bratislava is very close to the Austrian and Hungarian border, the sub-urbanisation process is now already stepping over the national borders and the need for public transport services is growing. The first new bus service to be introduced was between Bratislava and the Austrian town Wolfsthal - later extended toHainburg. At the end of last year a new service was launched between Slovakia and the Hungarian border village Rajka, at hourly intervals. For this line two new buses were purchased, co-financed by the European Regional Development Fund and the Municipality of Bratislava.

The latest addition to this process is a new local bus line between the Hungarian town of Komárom and the Slovakian town Komárno, which lie on the two sides of the River Danube.